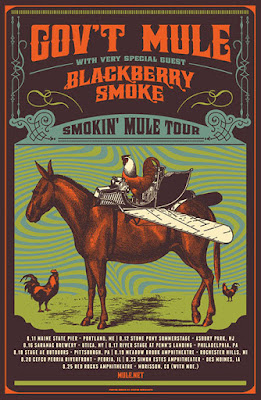 Fronted by visionary Grammy-winning artist and guitar legend, Warren Haynes, Gov't Mule has announced the Smokin' Mule 2016 Summer Tour with very special guest, Blackberry Smoke. Kicking off August 11 in Portland, Maine, the Smokin' Mule Tour will include stops in Philadelphia and Des Moines on the way to their August 25 show with moe. at Colorado's famed Red Rocks Amphitheater.

Despite touring together for the first time, the two groups are no strangers. In 2014 Blackberry Smoke joined Gov't Mule at Blue Hills Bank Pavilion in Boston, Mass., and Warren Haynes performed with Blackberry Smoke on stage at 2015's acclaimed Christmas Jam in Asheville, N.C. This August, they will come together again to rekindle the magic with ten shows across the United States and more dates to be announced soon.

*Hubert Heights, OH will be available on April 13th for pre-sale with tickets on sale April 15th. Philadelphia on sale at April 8th 1pm ET.
Posted by LovinLyrics at 4:06 PM