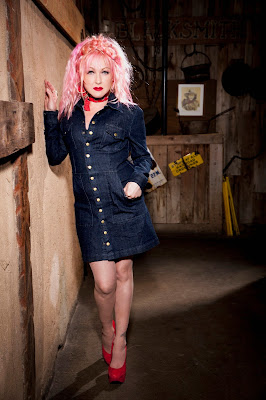 Grammy®, Emmy® and Tony®-winning singer-songwriter Cyndi Lauper is taking a country DETOUR May 6 with her highly-anticipated new album (available for pre-order now) featuring a collection of country covers from the 40’s, 50’s and 60’s. In support of the album and her upcoming tour, Lauper will be making pit stops on television, radio and across digital platforms, including NPR, CMT Online on May 4, “CBS This Morning” May 7, “Late Night with Seth Meyers” May 5, CMT’s Hot Twenty Countdown May 7 and 8, and GAC May 10 and 19 with additional features in Associated Press, USA Today, Rolling Stone Country, Maverick Magazine, NASH Country Weekly, Billboard and syndicated radio programs “Big D & Bubba,” “Kickin’ It with Kix,” “America’s Morning Show,” “Nash Nights Live,” CMT Radio and more.

While the 19-city first leg of her “Detour Tour” will kick off May 9 at the “Mother Church of Country Music,” Nashville’s Ryman Auditorium, the 16-city second leg will return Sept. 10 at Austin’s ACL Live and traverse the west coast before wrapping up October 8 at the The Joint in Las Vegas. Click here to purchase tickets.

DETOUR is Lauper’s first for Sire Records and executive produced by legendary Sire founder, Seymour Stein. DETOUR will be available May 6 on CD ($18.98), LP ($24.98), and digitally.

For the album, Lauper duets with several special guests, including country music royalty: Emmylou Harris (on the title track), Willie Nelson (“Night Life,” a song he wrote over 50 years ago), Vince Gill (Loretta Lynn and Conway Twitty’s “You’re The Reason Our Kids Are Ugly”) and Alison Krauss (Dolly Parton’s “Hard Candy Christmas.” Jewel also makes an appearance on DETOUR, showcasing her prodigious yodeling skills on “I Want To Be A Cowboy’s Sweetheart,” which was the first country song by a woman to sell one million copies.

1.“Funnel Of Love”
2.“Detour” - Featuring Emmylou Harris
3.“Misty Blue”
4.“Walkin’ After Midnight”
5.“Heartaches By The Number”
6.“The End Of The World”
7.“Night Life” - Featuring Willie Nelson
8.“Begging To You”
9.“You’re The Reason Our Kids Are Ugly” - Featuring Vince Gill
10.“I Fall To Pieces”
11.“I Want To Be A Cowboy’s Sweetheart” - Featuring Jewel
12.“Hard Candy Christmas” - Featuring Alison Krauss