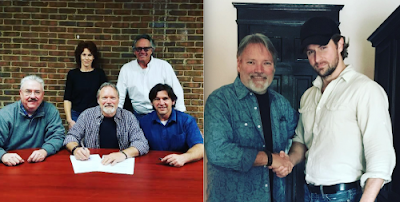 "After my successful Kickstarter effort last fall resulted in the recording of my new album, What I Love The Most, I wanted to partner with a label that would really 'get it,'" says Berry. "I was very pleased when Mansion Entertainment and Sony RED stepped up and was excited to release it. They are focused and we are all looking forward to its June 3rd release."

Berry adds, "I had heard of Absolute Publicity and I am friends with many of the acts they represent. So when my manager and label both suggested them I knew it would be the right fit. I am thrilled to work with Don and his team in promoting this album I am so proud of."

More information about Berry's new album will be announced in the coming days.

About John Berry
During his star-making decade, John Berry placed 20 singles on the county hit parade. He earned Gold and Platinum records. He was nominated for a Grammy Award, CMA Awards and ACM Awards. Berry's co-written "A Mind of Her Own" and "Kiss Me in the Car" introduced him to radio audiences in 1993. Then "Your Love Amazes Me," "What's in It for Me" and "You and Only You" thrust him to stardom in 1994. "Standing on the Edge of Goodbye," "I Think About it All the Time," and "If I Had Any Pride Left at All" were all major hits the following year, and the first-named earned John Berry a 1995 Grammy nomination. Berry took "Change My Mind" into the country-music top-5 in 1996. "She's Taken a Shine" became an even bigger hit in 1997. Both fans and the media took note when "There He Goes" was released as a 1999 duet with Patsy Cline.