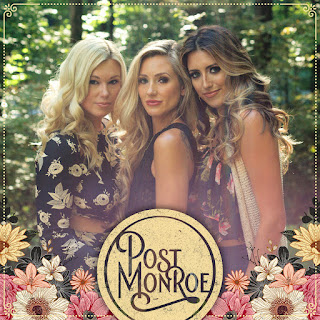 Sony ATV singer-songwriters Ashlee Hewitt and Shelby McLeod have joined forces with Given Entertainment’s Whitney Duncan to emerge as the latest country trio, Post Monroe with a self-titled debut EP to be released for digital download on May 13.

“We are so excited to get the first taste of our music out and available for everyone to hear,” said Duncan. “We have really been looking forward to this day for quite a while.”

Hewitt added, “We truly feel like the chemistry we have found together in the writing room and in the studio is something very special; we feel so blessed.”

The five-track EP produced by Chuck Ainlay and Dave Haywood of Lady Antebellum (with Aaron Chmielewski producing on “Lucky One”) was born out of the writing room and combines Post Monroe’s distinct harmonies and sweet mandolin melodies with southern attitude.

“I have had such an amazing time being on the production side of the music-making process with Post Monroe,” said Haywood. “I truly believe that these girls are the real deal – from the writing room to the studio - they have a unique perspective and fresh sound that I can’t wait for people to hear.”

The trio came to fruition as Hewitt and Duncan discovered McLeod’s voice after a co-writing session and decided she was the woman to complete the package. Individually, the ladies approach their craft from different perspectives that support the creative flare of their work.

“We are strong women and we’re vulnerable,” said McLeod. “There are many sides to every woman and we like writing songs that speak from all those sides.”

While drawing from unique backgrounds, Post Monroe blossomed from each member’s early passion for music. Hewitt, who came of age on a farm in Lancaster, Minn., has extensive experience in live performance playing 150 shows annually throughout her teenage years and was a former contestant on the sixth season of Nashville Star before relocating to Music City.

A native Tennessean, Duncan, has been amongst Nashville’s elite songwriters since the age of 15. She was recognized on the Warner Music Nashville roster in 2008 with the release of her album Right Road Now featuring the popular “When I Said I Would” and “Skinny Dippin”.

With a more traditional path, McLeod spent her childhood singing locally and participating in musical theater in her hometown of Madison, Ga.. She earned a degree in communications from the University of Georgia before acquiring a position in the music industry where she initially got to know her bandmates.

The first single from the project will be “Red Hot American Summer” and the video will soon follow the debut release. For more information, visit PostMonroe.com.

5. Hell On Me
(Whitney Duncan, Chris Tompkins)
Posted by LovinLyrics at 11:35 AM