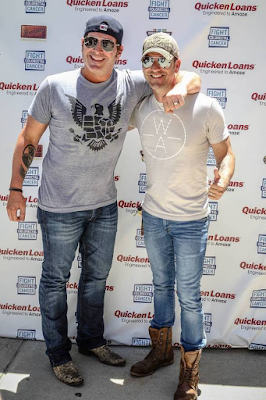 “We had a huge day! All my friends came out, we raised a ton of money and I feel like we educated more people about colon cancer,” enthused Campbell. “Success!”
Campbell is currently climbing the country radio charts with new single “Outskirts of Heaven” that he co-wrote with Dave Turnbull (Kenny Chesney, Blake Shelton) and Rolling Stone Country describes as “a ballad with a sweeping, Nineties-style twang.” Following 2015’s “Tomorrow Tonight,” he has been in the studio with producer Mickey Jack Cones working on his RED BOW Records debut album. Having shared the stage with Randy Houser, Alan Jackson, The Band Perry, Jerrod Niemann and Justin Moore, he is currently touring across the U.S. and will be playing major fairs and festivals throughout the summer.
Posted by LovinLyrics at 1:12 PM