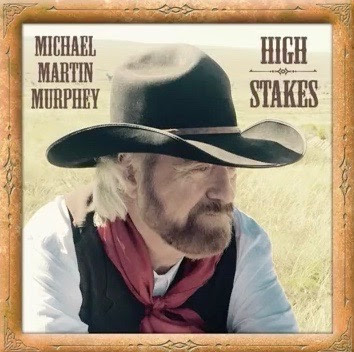 A prolific singer songwriter, Michael Martin Murphey has been an integral part of the American musical landscape since the early ‘70s. Penning and performing perennial favorites “Wildfire”, “Carolina in the Pines” and “Geronimo’s Cadillac”, Murphey’s songs have also been covered by artists like Lyle Lovett, John Denver, Hoyt Axton, Kenny Rogers and The Monkees. His music has topped the pop, country, bluegrass and Western music charts, earning him six gold albums and multiple Grammy nominations over the years.

A native Texan, Murphey grew up in Dallas, part of an extended ranching family. Cowboy songs and Western music have always been a part of his life and he’s been a longtime proponent of Western culture, wilderness and wildlife, as well as the “cowboy lifestyle.” On his latest release, High Stakes: Cowboy Songs VII, Murphey returns to his roots with 13 songs that celebrate that cowboy culture.

“Cowboy music and country music and the music of the plains were brought here in the 1800s, late 1700s colonial period. That is Americana music. That is the original American music,” Murphey commented.

Murphey believes that his home state of Texas, due to its geography and history, was at the center of the creation of this sound.

“[Texas] is the crossroads of black music and Hispanic music and country music and cowboy music, and in many ways, cowboy music from Texas is probably the original American music because it’s so influenced by these,” he commented.

Murphey’s new album is a mix of original songs and covers. He and his son Ryan co-wrote several of the tunes.

“Working with your own flesh and blood is great, and that’s what’s great about the cowboy culture and about the ranchers too, so it fits right in with my tradition,” Murphey noted.

This father-son collaboration dates back decades.

"My son and I have worked together since he was about six years old,” Murphey said. “He may have even been five when he first went on ‘Austin City Limits’ with me. He played guitar and sang a Hank Williams’ song with me. As a teenager, he became my lead guitar player, and over the years, he just became a creative force in my life, including producing a lot of my albums.”

“It’s about the pride that [Williamson] has in working with his son on his ranch in Australia,” Murphey explained. “It’s all part of the culture and the way we do business.”

Family ties are important to Murphey.

“My dad and I were very close until the day he died,” Murphey recalled. “My family’s all been involved in my business in one way or another – all my kids, all my grandkids – in the business of making music and helping me get through it all.”

In addition to family, this album also celebrates the land, as well as the people who work it.

“It has a mission,” Murphey said of High Stakes. “This album is about the struggle of people in the cattle business to be recognized for what they do… The mission of this album is to bring out the struggles and the victories. The pride, the joy, the pain, the tears. It’s a set of cowboy songs all about the big human emotions and experiences. It’s about life and death. It’s about outlaw-ing and keeping the law. It’s about love and about forgiveness and about honor – all wrapped up in these songs and seen through the prism of cowboy life.”

For more information on Murphey and his music, visit www.michaelmartinmurphey.com.
Posted by LovinLyrics at 2:10 PM