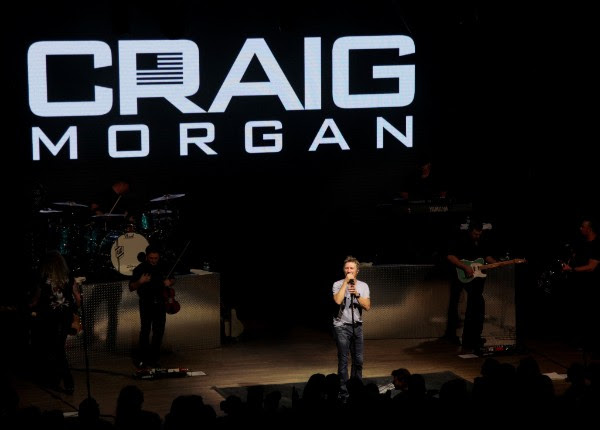 Fans and friends crowded into the newly renovated Wildhorse Saloon this week to celebrate the release of Craig Morgan’s profound new album a Whole Lot More To Me. The night, presented by Kidde, Line-X, and NRA Country kicked off with performances by Hailey Whitters, Jillian Cardarelli, Adam Sanders, and Mac Powell. The party continued late into the night with Morgan taking the stage and sharing tracks from the new LP and several of his chart toppers with fans singing along.

Memorable moments included surprise guests Eric Paslay and Kane Brown with Paslay joining Morgan on stage for a song he penned on the new album called “Country Side of Heaven.” The crowd was thrilled when Brown performed a reprise of one of Morgan’s biggest hits “Almost Home.” Third Day’s Mac Powell came back out onto the stage during Morgan’s full throttle set to join forces on “Hearts I Leave Behind,” electrifying the fans. Craig kept the crowd on its toes all night as he performed the moving “Nowhere Without You” while roaming through the Wildhorse and ended the night with a rousing stage dive!

About Craig Morgan: A multi-faceted entertainer, CRAIG MORGAN has made a name for himself as a country music icon, TV host, celebrated outdoorsman and patriotic Army veteran. One of country music's best-loved artists, the Black River Entertainment artist thrills massive crowds with signature hits including “Bonfire,” Almost Home,” “Redneck Yacht Club,” “International Harvester,” “This Ole Boy,” Wake Up Loving You” and the six week #1, “That's What I Love About Sunday.” Morgan’s new album, A Whole Lot More To Me, featuring singles “I’ll Be Home Soon” and “When I’m Gone,” released June 3 on Black River Entertainment. Craig received one of country music's highest honors when he was inducted as a member of the Grand Ole Opry in 2008. In addition to a prolific country music career, he hosts the award-winning TV show “Craig Morgan: All Access Outdoors,” set to premiere its seventh season on Outdoor Channel. Prior to becoming a country music star and TV sensation, Morgan spent seventeen years serving our country in the Army and Army Reserves. He is an avid supporter of America's military personnel and a recipient of the 2006 USO Merit Award. For more information on Craig Morgan, visit www.craigmorgan.com and engage with him on Facebook, Instagram and Twitter.
Posted by LovinLyrics at 3:35 PM