#ARTISTTIPS - GOT FANS? WANT MORE OF THEM? 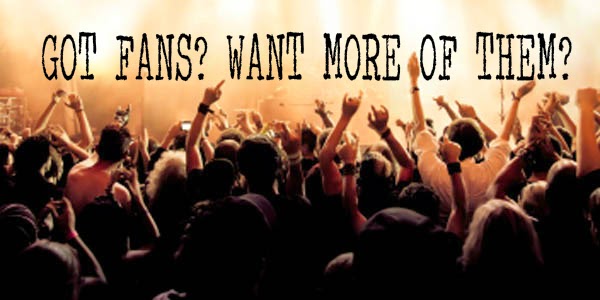 Many unsigned artists are creating some of the best music, but without the help of a label, have no idea of how to reach and increase their audience. It can be done, just look at Florida Georgia Line. They started as independents and put their focus into building their fan base before even trying to go to radio. If you don't have a solid following of supporters behind you, all the radio play in the world isn't going to matter. Start with the foundation and build it from there. Radio is gonna be there so don't stress about having to get radio play first, build the fan base and do it right, it will come on it's own.

It's really common sense, if you want to be heard, you have to put yourself out there and these days, that means social media and personal connection. Yes, it's a time sucker, yes, it can be annoying, but yes, it makes a valuable difference.

You have to put out music that people want to hear and want to tell others about. Put out a product you're proud of, that you care about. Make sure it's up to par as far as production and quality. Make sure it's "promotion worthy". This is YOUR career and YOUR reputation, those are two things always worth the most money you can afford to spend and always worth the effort.

Many artists seem to grasp the reality that in today's market, you have to have an online presence via a website and social media. It's great that they understand but are they making the most of it? The saying used to be, when referring to children, "they should be seen but not heard". When it comes to artists trying to get their music out there, the saying changes a little to "you have to be seen to be heard."

Social media is a tool that artists today are blessed to have access to. Artists as little as ten years ago didn't have the luxury of getting to know their fans and actually having a way to personally reach out to them, to build a relationship beyond just sales, radio and magazine interviews and TV appearances. Now you can reach out to millions of potential fans at once and that's huge for potential growth! You have these amazing FREE tools (Twitter, Facebook, Google+, Snapchat, Instagram, Tumblr and so many other websites), use them to your advantage. Consider social media the bridge that connects you to the world because that's exactly what it is. Without it, you're stuck and aren't gonna move much.

3. Enough with the SPAM and Over Indulgent Self-Promotion

We know you're hurting for promotion and have to do it yourself, but no one wants to be bombarded with 25 emails a week saying "come to my show, see my new tshirts, hear my new song." Sending out never ending self-promoting SPAM is a surefire way to lose new fans. Likewise, when you're online using Twitter or Facebook, there is no need to promote the same news over and over again, to promote the same show more than a couple of times a week, or to keep telling fans that "I'm #110 on Reverbnation." We know. Don't overkill.

Along the same lines, when you're sending your music to bloggers, industry reps, etc, be thoughtful in how you present yourself. If you send an email or online message, tweet, whatever and it starts off with "Here's my new song" or "I'm the next big thing", guess where it's more than likely gonna wind up? The garbage or recycle bin. Introduce yourself, ease into it without smacking the reader in the face with link, video or file. Let them know who you are, what you've done and why they should listen to you. Consider yourself a product. You have to pitch your product, make it attractive and make people want to buy your product. Would you buy a product you knew nothing about?

Keep fans in the know, keep them in the middle of your loop. Artists like Lady Antebellum, Florida Georgia Line and Chase Rice do regular webisodes on the road that feature highlights from that week's show and special events. Fans LOVE this. It gives them an insight behind the scenes and let's admit it, we all like to be a little nosey. Craig Campbell does a regular "Craig Cam" that even features his family from time to time, this is going over great with his fan base. Steve Azar does a "What's in the Pot" feature from his kitchen. Brett Eldredge posts some of the funniest videos out of the blue and he is hysterical and keeps it fun. If you can't do video, just write a blog and let fans know what's going on, interesting things that they might have missed or that happened at a show or just to thank them now and then.

Here is an example of Brett Eldredge's "Sing It Wednesday" Webisodes

View yourself from the fan's perspective. Would you honestly be interested in what you're doing? Would you find your website appealing, your tweets engaging, your Facebook posts worth commenting on? Do you take the time to get to know your fans? Do you read THEIR timelines and keep up with THEIR special announcements like birthdays, weddings, engagements, deaths in the family? Do you acknowledge these? One or two days a week, put yourself in their shoes and read the things they're putting out there whether it applies to you or not. If you see an engagement announcement, wish them the best of luck. Send random fans a simple "hi, just wanted to thank you for all you do" tweet or post on Facebook. If you can take the time to tweet about the latest news, your new show, etc, you can take the time to engage with them one on one. It's not hard to do and it's worth your time. If someone tweets about you, acknowledge it with a thank you. Every tweet eventually leads to a record sale or a new fan somewhere down the line. It's basically virtual sales for you. Your fan is your biggest promoter.

If you're going to take the time to have an online social media account, take the time to participate and engage personally. There is no bigger turnoff than a page that is obviously run only by a social media manager. It's so impersonal, obvious to fans and too "starched white shirt" stiff. We all know you're busy, fans are just as busy as you but still find time to tell people about you. You can take a few minutes a week to tweet, it's only 140 characters and takes less time than drinking a single beer.

They're mostly great people, just wanting to help you, that see something special in you. They see something so special in you that they're willing to drive hours just to see you in person, they spend money that should be spent elsewhere on your shows, your merchandise. Hold fan participation events like online chats, video hangouts, interactive contests, pick out random fans at each show and upgrade their tickets to front row or grab a few and invite them backstage and take them to catering to sit down and grab a bite to eat and talk for a few minutes. Do something other artists aren't doing, make yourself a fan favorite just by showing them that you enjoy them.

If you want to be know, you have to let people get to know you and get to know them. It's a reciprocal world out there now. Take part in it, have fun, be the artist that fans want to tweet and connect with. Don't be the artist who never responds, who never posts, who never makes an effort to connect with the very people who keep you going. They're your biggest promoters, so you need to give them a reason to talk about you.

Posted by LovinLyrics at 9:03 AM