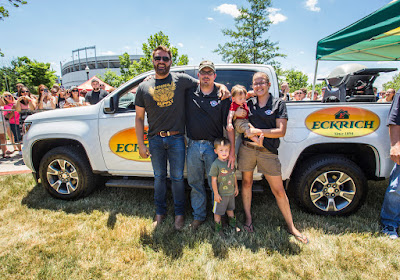 Before taking the stage in front of more than 40,000 country music fans at the Buckeye Country Superfest at Ohio Stadium on Sunday, June 19, Randy Houser celebrated Father’s Day by teaming up with Operation Homefront and Eckrich to honor one U.S. military veteran with a special “thank you” gift, surprising Jon Fearnow and his family with a brand new truck outfitted with more than $50,000 in tailgating and grilling items. Houser, who has partnered with Operation Homefront and Eckrich to honor U.S. military families since 2014, presented the Fearnow family with a 2016 Chevrolet Colorado packed with a new grill, a cooler full of Eckrich products and other grilling accessories to honor them for their service and sacrifices. They were also gifted with free groceries for one year at Kroger, courtesy of Eckrich. 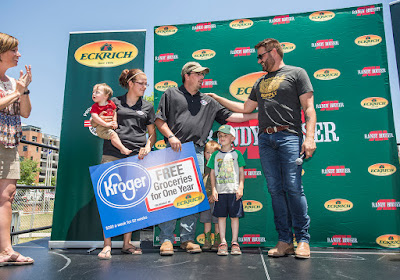 “Our military families make such tremendous sacrifices so that we have the freedom to go out every day and do what we love,” said Houser. “The Fearnow family has given this country so much, and I’m grateful and very humbled to have this opportunity through Eckrich to give something back to them and let them know how much we appreciate their service and the sacrifices they’ve made.”

Houser, who has been called “the Pavarotti of mainstream country music” (The Plain Dealer), continues on his trek with Dierks Bentley’s Somewhere On A Beach Tour this weekend. For more information and upcoming tour dates, visit www.RandyHouser.com or follow on Twitter @RandyHouser and www.Facebook.com/RandyHouser.
Posted by LovinLyrics at 9:37 AM