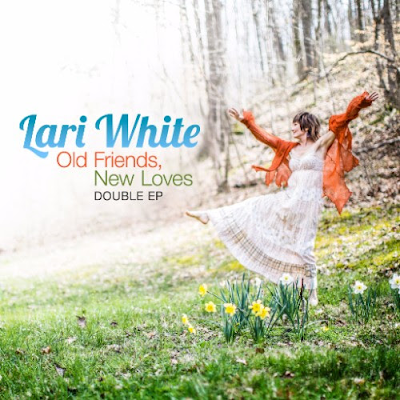 Grammy® winning vocalist, film (Cast Away) and Broadway actress, published author, hit songwriter and history-making record producer, LARI WHITE, is marking 25 years as a recording artist as she prepares to release the double EP, Old Friends, New Loves, this fall. The passion project will lead with a Kickstarter campaign launching June 9 and allow her fans and fellow music lovers to be part of the creative process.

“I’m excited to bring everyone into the studio with me — and Kickstarter lets me do that,” White says. “This will be the first recording I’ve done where the fans ARE the record label. They back the project and I report directly to them on every little detail, giving them control-room access to the whole process.”

Recording at The Holler, White’s landmark recording studio, friends and fellow stars Suzy Bogguss, Lee Roy Parnell and other long-time collaborators from White’s earliest days as a country star will make special guest appearances on the first of two EP projects currently in the works — Old Friends — highlighted by rootsy re-inventions of breakout hits like “Lead Me Not,” “That’s How You Know When You’re In Love” and “That’s My Baby.” The second EP — New Loves — features White’s recently-penned originals and favorite covers, a rich stew of Americana, soul, jazz and country songs, featuring guests Shawn Mullins and bass legend Victor Wooten.

“My fans have followed me the whole way on this crazy 25-year creative journey,” shares White. “We love music and we love storytelling, and we don’t let ourselves be limited by rules about genre or medium or “brand” for God’s sake. The only rule is that it’s honest. And I honestly LOVE country and jazz and soul and movies and literature and photography and any art that moves the human spirit to a good place.”

Lari White’s Kickstarter campaign launches the first day of CMA Music Festival, Thursday, June 9 and runs through July 13 at http://kck.st/1U7K8qM. It allows fans to participate in the creation of Old Friends, New Loves and features a range of unique rewards for contributors. Standouts include a two-night Nashville vacation in White’s West Nashville bungalow with a champagne breakfast prepared by the singer herself. Other notable items include voice lessons with Lari through her new ArtistWorks Country Vocal School and a backstage pizza party at one of her upcoming concerts. Contributors can also get producer credit on the new albums or an intimate acoustic house concert.

“I can hardly believe I’ve been lucky enough to make music my entire life,” says White. “Sharing my music-making process is one way I can say ‘Thank YOU!’ to the fans who have made it possible for an amazing 25 years!”

Join Lari White’s Kickstarter campaign at http://kck.st/1U7K8qM and connect with her @SkinnyWhiteGirl and Facebook.
Posted by LovinLyrics at 11:58 AM