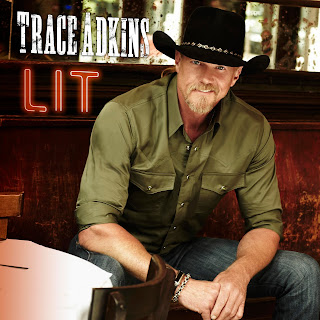 This Friday, get ready to ‘slap your grandmas’ as Trace Adkins gives his first TV performance of new single, “Lit,” during his Fox & Friends’ All American Summer Concert Series. As the big man kicks off July Fourth Weekend with this outdoor mini-concert, “Lit” will become available at iTunes and all other digital retailers and streaming partners.

The new single is a stomp-along that takes Adkins back to his ‘Badonkadonk’ best as he counts down the things that get him fired up. Granny’s back (this time she’s drunk, playin’ Bingo), Grandpa’s fishin’ with dynamite, there’s a little “Sunday morning brimstone from a Pentecostal pastor,” and, “Keith Richards stoned on Rock ‘n Roll tearin’ up that Telecaster.” Of course, nothing revs up this cowboy more than his girl, “slide on over, move a little closer with that four-alarm, fire-engine-red on your lips. So hot, you got me smokin’, girl you got it goin’ on, you’re the only one with the kiss that gets me lit.”

“Lit” was written by Mickey Jack Cones, Monty Criswell and Derek George. It follows “Jesus and Jones,” as the second single by Adkins as he makes his return to music with Wheelhouse Records (BBR Music Group). Both singles will be on Adkins’ forthcoming album release, details to be announced.
Posted by LovinLyrics at 10:17 AM