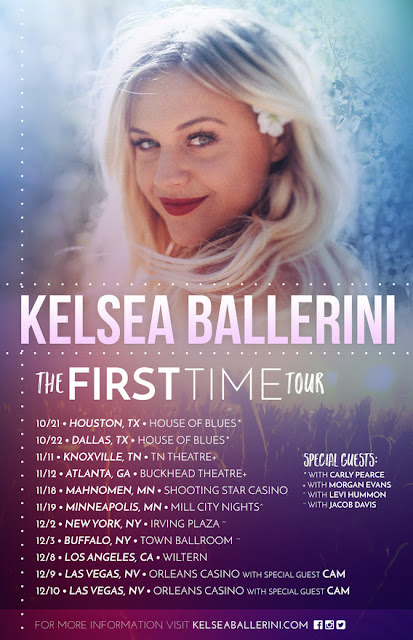 Named after her critically-acclaimed debut album THE FIRST TIME and kicking off October 21 in Houston, TX, the Black River artist's nationwide trek will take her record-breaking hits like “Love Me Like You Mean It” and “Dibs” to 10 cities over the 11 dates with additional dates to be announced soon. The tour is set to wrap up with a two-night stand in Las Vegas with special guest Cam in early December. The news comes on the heels of Ballerini’s latest single, the smash “Peter Pan,” entering the Top 10 on both the Billboard Country Airplay and Mediabase radio charts, while its fantasy-themed music video , directed by Kristin Barlowe, nears 10 million views on Vevo.

“I’ve been blessed to open for so many incredible artists and people I admire. Getting to watch their shows and learn more about our craft has inspired me to grow as an artist,” shared Ballerini. “One of the highlights of touring has been meeting fans and creating new relationships along the way. And for that reason, I was inspired to put together my first headlining tour. I can’t wait to get up close and personal with the people who have made the last few years so incredible. See you this fall!”

Already on the road as part of Rascal Flatts’ RHYTHM & ROOTS Tour, media outlets around the country can’t get enough of Ballerini’s musical style and sparkling personality, raving about recent performances with quotes such as:

“…Ballerini, who has the fresh-faced, doe-eyed enthusiasm of a younger Mandy Moore, impressed with her soulful voice and inviting stage presence...” - The Charlotte Observer

“…Ballerini's vivacity is almost tangible, and it is easy to see her taking the next steps towards stardom…” - The Plain Dealer

^ With Levi Hummon
~ With Jacob Davis

Adding to the excitement, Ballerini will perform tonight (8/1) on ABC’s Jimmy Kimmel Live! outdoor stage, this Wednesday (8/3) will feature her as part of the massive CMA Music Festival: Country’s Night to Rock concert special (also on ABC) and on Thursday (8/4), she and Arsenio Hall will co-host the grand finale of ABC’s musical retrospective “Greatest Hits” live from Microsoft Theater in Los Angeles.