With 75mph wind gusts ripping the light truss from the lip of the shed at Neptune Park's 31st Street Stage in Virginia Beach Wednesday night, it appeared ACM-winning band Old Dominion's return to their namesake and home state would be rescheduled or at least postponed to a later date due to damages, but Old Dominion -- band and crew -- proved to be a force of nature themselves. Taking the stage only 90 minutes behind schedule after resetting and securing the stage, Old Dominion members Matthew Ramsey, Brad Tursi, Trevor Rosen, Geoff Sprung and Whitt Sellers welcomed the droves of fans lining the tousled bike railing into the park for a free stripped performance that included their two-week No. 1 "Break Up With Him," "Snapback" and current single "Song For Another Time" from their debut album Meat And Candy, along with several of the hits they've written for other artists. 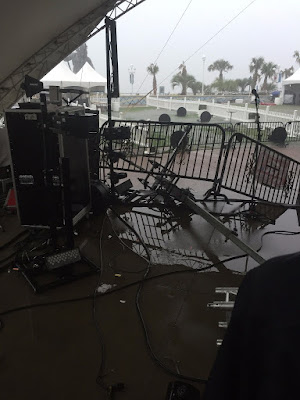 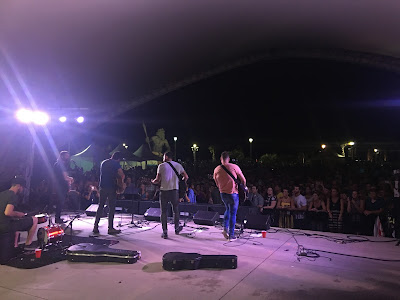 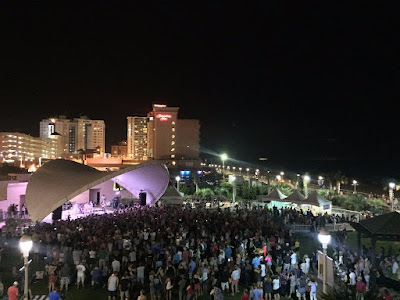 The band will assess the ultimate damage to their touring equipment tomorrow before their headlining show at Wilmington, N.C.'s Greenfield Lake Amphitheater before joining Kenny Chesney at East Rutherford's MetLife Stadium on Saturday, Aug. 20.

For more information about Old Dominion tour dates or to hear “Song For Another Time," visit www.olddominionband.com  and  www.facebook.com/olddominionband or follow @OldDominion on Twitter and @OldDominionMusic on Instagram.
Posted by LovinLyrics at 1:48 PM