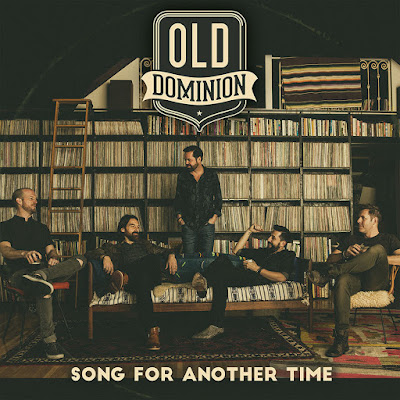 Every journey begins with a first step, and for the critically-acclaimed, award-winning band Old Dominion, those first few thousand strides were spent playing non-stop across the country, years before ever receiving recognition from Music Row. It’s those performances, and the moments in-between, that the band credits for preparing them for the onset of their recent success, however instead of dismissing their past, the five-member band consisting of Matthew Ramsey, Trevor Rosen, Geoff Sprung, Brad Tursi and Whit Sellers have chosen to put a spotlight on those nostalgic moments via never-before-seen clips in their latest music video. Beyond just highlighting the vast influences along their musical journey, “Song For Another Time,” their latest from Meat And Candy, takes a retrospective approach to the music video for their single that artistically combines home video footage from each member’s childhood, along with photos and videos from defining moments in the band’s emerging career.

"When we were writing this song - it was all about seeing the end of the road ahead," said lead singer Matthew Ramsey. "It was about two people realizing their love isn't going to be enough and the need to hold on to those last few moments. Music plays such a huge role in everyone's life, especially in relationships. We felt like it would add much more weight to the story if we told it using the titles of songs that are timeless somehow.  But when it came time to make the video, we realized we had an opportunity to show people a little of our history as a band. We had family and friends that supported us way back that pitched in when digging up old footage and sending it in. The journey our music has taken us on sometimes doesn't seem real. But watching this video proves that it is real beyond what we ever imagined. We are very proud."

Ramsey co-wrote the single alongside Old Dominion’s Rosen and Tursi and frequent collaborator, Matt Jenkins (co-writer on “Half Empty,” “Wrong Turns” and “Nowhere Fast” from Meat And Candy).

Old Dominion unveiled their music video for “Song For Another Time” today across all VEVO platforms. The music video again sees them collaborating with Director Steve (“Break Up With Him” and “Snapback”) for the song NPR calls “an anthemic number that name-checks generations of popular odes to getting caught up in the moment; it's a songbook populated by Neil Diamond and Tom Petty, Van Morrison and John Mellencamp, George Strait and Katy Perry,” adding, “that's the lineage Old Dominion wants to claim.”

2015 was an incredible year for Old Dominion, full of firsts for the band, and 2016 is shaping up to be another momentous year. This year, RCA Nashville’s band has received accolades including ACM Breakthrough Duo/Group of the Year, AIMP Songwriter/Artist of the Year, Music Row Breakthrough Artist of the Year and ACCA New Duo/Group of the Year. Their debut single and two-week No. 1, “Break Up With Him” is RIAA Platinum-certified and their follow-up hit, “Snapback” is RIAA Gold-certified. Fans can currently catch Old Dominion on tour this summer with Kenny Chesney on the Spread The Love Tour.

For more information about Old Dominion tour dates or to hear “Song For Another Time," visit  www.olddominionband.com  and  www.facebook.com/olddominionband or follow @OldDominion on Twitter and @OldDominionMusic on Instagram.