It's no secret that Kirt Webster and his staff at Webster Public Relations are some of the best publicists to work with in the industry. They're always top notch professionals, kind and helpful to media outlets such as myself. It's no wonder that the who's who of country music would only want to work with the best and that best is Webster Public Relations. I truly appreciate Kirt and the entire WPR crew. Thank you Webster PR for all you do for me ... Jennifer 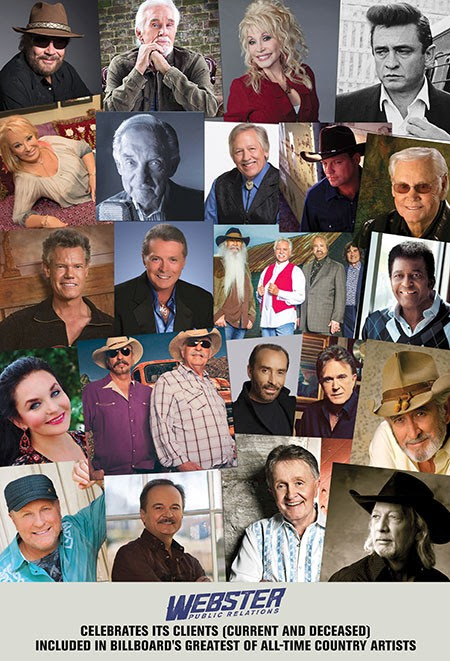 Webster Public Relations is blessed to work with some of the best-selling and most influential artists of all time. Collectively, our artists have sold hundreds of millions of records and Billboard's recent ‘Greatest of All-Time Country Artists’ chart proves it (list below).

Webster PR’s client roster continues to tour year-around, record new music and entertain their loyal fan base, and can also be seen on such national TV series as Today, The Tonight Show, Fox & Friends and more.

"What an honor to have 22 of artists that we work with in the Billboard Top 100 Greatest of All-Time Top Country Artists!," exclaimed Wester Public Relations president Kirt Webster. "The heritage and history of Country music must never be forgotten and many on this list represent decades of musicians who have come and gone, yet their music and influence still is recognized today. As a fan – which we all are at heart – I grew up enamored with all of the artists listed in the Top 100, whether we represent them or not. What a blessing it was to represent George Jones, Johnny Cash, and Ray Price, who may no longer be with us, but their music has continued to live on and influence many of today's stars.”

According to Billboard, the Greatest of All-Time Top Country Artists rankings are based on weekly performance on Hot Country Songs (from its Oct. 20, 1958 inception through June 4, 2016) and Top Country Albums (from its Jan. 11, 1964 inception through June 4, 2016). Titles are ranked based on an inverse point system, with weeks at No. 1 earning the greatest value and weeks at lower spots earning the least. Due to changes in chart methodology over the years, eras are weighted differently to account for chart turnover rates over various periods. Artists are ranked based on a formula blending performance, as outlined above, of all their Hot Country Songs and Top Country Albums chart entries. The full chart can be viewed on Billboard’s website here and listened to on Spotify.
Posted by LovinLyrics at 3:52 PM