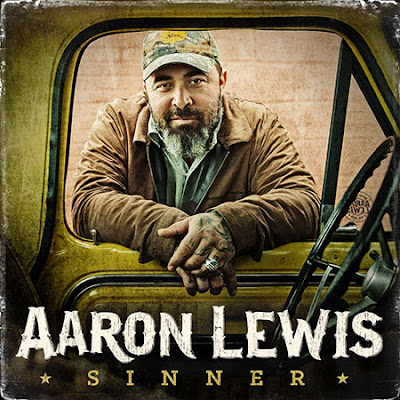 Aaron Lewis delivers the “authentically country” (Wide Open Country) SINNER today on Dot Records, marking his third solo project in the genre. Already summiting the iTunes All Genre and Country Albums charts this morning, the entire album was recorded in 16 hours at Nashville’s Blackbird Studios under the helm of legendary producer Buddy Cannon (George Strait, Merle Haggard, George Jones). Lewis single-handedly penned eight of the 12 tracks, including “That Ain’t Country,” which he performed on FOX & Friends yesterday (9/15). The lead single serves as a commentary on the current state of “country, if you can call it that,” as Lewis pines for the sound of his honky-tonk heroes.

“I have certainly not kept my feelings a secret about some of the stuff that is popular today,” expressed Lewis. “Sometimes it is hard for me to even recognize Country music and that is why it was very important to me to go back to my roots and record a more traditional album. This is the type of music I grew up listening to and I to make sure that my influences like Willie Nelson, Merle Haggard and Waylon Jennings are reflected in my record.”

Beginning October 24, legions of fans can see Lewis’ live show throughout his SINNER TOUR and as he joins the Budweiser One Night Only concert series at the Beacon Theatre on November 15 for MSG Live, in association with Big Machine Label Group and Cumulus Media. Tickets will go on sale to the general public on Saturday, September 17 at 10:00AM. The Budweiser One Night Only concert series is a joint initiative between The Madison Square Garden Company and the brewer, as part of the long-standing partnership between the two organizations.

As Lewis continues to build his strong fan base early praise fuels his Country music pedigree. Gayle Thompson from The Boot raves, “Aaron Lewis shows a surprising understanding and respect for country music with his latest album, SINNER. Drawing from his childhood influences of listening to country music in his grandfather's car, Sinner shows Aaron's abilities as a singer, songwriter, musician and stylist. With guest appearances from Vince Gill, Alison Krauss, Willie Nelson and Dan Tyminski, SINNER might just be the record that propels Aaron to a permanent place in country music.” Maverick Magazine’s Eric Dahl concurs, “Aaron Lewis brings a raw honesty to his songs on the new album SINNER that Country Music radio hasn’t heard in a long time. The imagery of the lyrics sucks you in, but his mournful voice and guitar keep you!”