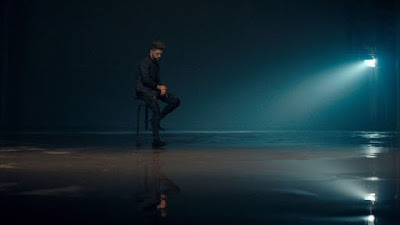 Making its exclusive world premiere tomorrow Saturday (9/17) on CMT’s HOT 20 Countdown and across all CMT platforms -- including CMT, the 24/7 digital music channel CMT Music, ChrisLane.CMT.com and CMT Mobile – Chris Lane’s official video for the tender new single “For Her” captures a moment of real-life romance as it unfolds.

In an flash of filmmaking magic like fans have never seen before, Lane, director TK McKamy (Florida Georgia Line, Thomas Rhett, Lady Antebellum), and a fan named Brandon set out to pull off a surprise marriage proposal right on the set of the “For Her” video shoot.

“Instead of making up a love story for the music video, I wanted to have a real life, genuine love story, and this is the real deal,” Lane says in the clip. “He’s got the ring.”

The elaborate setup worked to perfection, with Brandon catching his unwitting bride-to-be completely off guard -- on camera and surrounded by friends and family. Leading up to the premiere, fans can get an inside first look at the behind-the-scenes making of the video on ETonline.com.

In addition to the announcement of Lane’s new video, the breakout star has also revealed plans to make his late-night TV debut September 28 on NBC’s Late Night With Seth Meyers, set to perform his first chart-topping hit, “Fix.”

Co-written by Matt Dragstrem, Kelly Archer and Sarah Buxton, “For Her” follows “Fix” and once again pairs the newcomer’s breathtaking falsetto vocals with an R&B-meets-country feel. It’s the second single from his debut album GIRL PROBLEMS (Big Loud Records), which landed inside the Top 10 on Billboard’s Top Country Albums chart upon its August 5 release.

“Fix” marked Lane’s first #1 at Country radio, surpassing an impressive 24 million streams on Spotify and 5.5 million views on Vevo, and giving Big Loud Records its first-ever #1 with its first single – an unheard-of start for a new label. GIRL PROBLEMS – produced by superstar studio ace Joey Moi (Florida Georgia Line, Jake Owen) – has won praises from media, who are applauding Lane’s bold, fresh sound and standout falsetto; with early raves including from ROLLING STONE's “10 New Country Artists You Need To Know,” YOUNG HOLLYWOOD's “Artist To Watch” list, HELLO! Magazine's “People You Will Be Talking About” and GLAMOUR’s “Music We Love.” Lane has won shout-outs from massive industry names like Bryan Cranston (Breaking Bad), Selena Gomez, Florida Georgia Line, Lucy Hale, Daughtry, and more after starting his career selling out club shows in his hometown of Kernersville, NC, before going on to open for Dustin Lynch’s sold-out HELL OF A NIGHT Tour and spending his summer on the RHYTHM & ROOTS Tour, opening for Rascal Flatts and Kelsea Ballerini.