CD REVIEW: "IT'S ALL IN THE FAMILY" - SYLVIA

CD: "It's All in the Family"
ARTIST: Sylvia
RELEASE DATE: 10/7/16
REVIEWER: Jennifer Smith
Follow Jenn on Twitter at @lovinlyrics 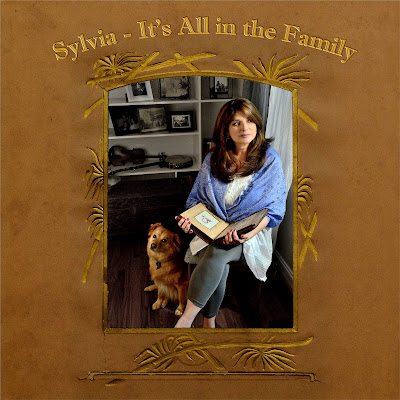 Pre-order "It's All in the Family" on iTunes and receive 2 tracks instantly
If you order the physical CD on CDBaby, you will receive an autographed copy

One single word brings back so many great memories of country music in the 80's and 90's for myself and many others. That single word is Sylvia. Even her mega hit song, "Nobody" was another single word but it sure made a big impact on country radio and had fans singing it and radio playing it. I remember putting the needle on the vinyl 45 and pretending I was in her shoes, only I was singing to the world in front of my mirror with my mom's hairbrush. It's those memories that last a lifetime and it's songs like "Nobody" that remind you of moments that weren't able to be captured on cell phone video or passed around social media. Songs like these are responsible for the memories of times that each of us were lucky enough to experience and are blessed to keep pressed between the pages of your mind and heart like a four leaf clover pressed between the pages of an old book for safe keeping.

Today's popular country music fan base may have changed and they may not recognize the name but Sylvia is far from a "Nobody" in the world of country music having released 10 albums since 1981, selling over 4 million records, her #1 song "Nobody" was the 1983 BMI Song of the Year garnering more airplay than any other song in the same year and spent a whopping 52 weeks on the Billboard Hot 100. Her other notable hits include "Snapshot", "Like Nothing Ever Happened", "Drifter" and many more. Another awesome fact is that her song "The Matador" was the very first concept video on CMT. Sylvia took a "detour" from the country music scene for a few years but she couldn't fight the feeling that it was the right time for her to return. Her first album in 14 years, "It's All in the Family", is set to release on October 7. The CD includes 12 tracks, most of which were co-written by Sylvia and notable writers including Thom Schuyler, Craig Bickhardt, Jeff Pennig, Kate Campbell, Bobby Tomberlin, and Mark Narmore. The CD is a deeply personal project for her. Each song is a relationship between her life, challenges and decisions that brought her to where she is today. Each song is a personal reflection on the road she's taken.

The entire CD is a thoughtfully put together compilation of honest sentiment, a "musical heartbeat" of sorts, and every song a personal testament that will reach into the heart and will affect each listener in a different way, with flashbacks to times and loved ones in their lives and challenges faced and overcome. The song that really did this for me was the title track, a story that is passed on from a grandmother to a granddaughter while looking through the old family photo album. The depth and raw, natural beauty of Sylvia's vocals will immediately grab your attention, make you stop and really listen to the message of the lyrics and the and between you and me, the listener may just find themselves a little misty (or so I hear ... *ahem*). "It's All in the Family" is a stand out in today's country as stories of Sylvia's yesterday unfolding in a new chapter for her future. It's a reminder of what matters and what's important and how fragile every day is. Wonderful CD. Just wonderful. The world needs more Sylvia and the timing of this release is absolutely spot on perfect.


Editor's Note; Thank you to Sylvia and the songwriters for the love you put into this project and the personal doors you've opened to the listener. This CD took me to places I'd long forgotten and brought me to tears. This was well worth the wait.
- Jenn
Posted by LovinLyrics at 4:05 PM