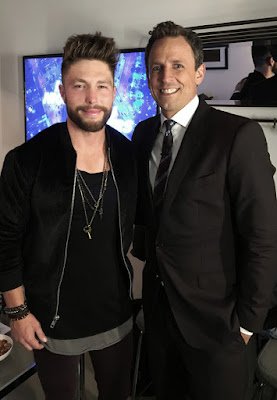 While Big Loud Records breakout artist Chris Lane is currently touching hearts with his lovestruck new single “For Her,” he took a moment to turn up the heat during his national TV debut on NBC’s Late Night with Seth Meyers last night (9/28).

Lane satisfied the cravings of late night viewers as he dominated the stage with a red hot performance of his first chart-topping stunner “Fix.” In case you missed it, watch Lane’s “Fix” performance here:


With jaw-dropping falsetto vocals mixed with a smooth R&B-meets-country vibe, listeners can’t get enough as Lane continues to blaze his own trail. His second single, “For Her,” off his debut album GIRL PROBLEMS, offers up a sweet real-life proposal music video which has since garnered over 124,000 views (and counting) in nearly two weeks.

“Fix” marked Lane’s first #1 at Country radio, surpassing an impressive 25.8 million streams on Spotify and 6 million views on Vevo, and giving Big Loud Records its first-ever #1 with its first single – an unheard-of start for a new label. GIRL PROBLEMS – produced by superstar studio ace Joey Moi (Florida Georgia Line, Jake Owen) – has won praises from media, who are applauding Lane’s bold, fresh sound and standout falsetto; with early raves including from ROLLING STONE's “10 New Country Artists You Need To Know,” YOUNG HOLLYWOOD's “Artist To Watch” list, HELLO! Magazine's “People You Will Be Talking About” and GLAMOUR's “Music We Love.” Lane has won shout-outs from massive industry names like Bryan Cranston (Breaking Bad), Selena Gomez, Florida Georgia Line, Lucy Hale, Daughtry, and more after starting his career selling out club shows in his hometown of Kernersville, NC, before going on to open for Dustin Lynch’s sold-out HELL OF A NIGHT Tour and spending his summer on the RHYTHM & ROOTS Tour, opening for Rascal Flatts and Kelsea Ballerini.