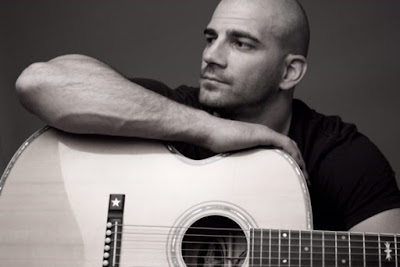 We recently had a chance to catch up with one of our favorite new artists, Scott DeCarlo. Scott's been out of the scene for awhile, his last single, "I See Trouble Comin'" released back in the summer of 2013. He may have been off the radar but he certainly hasn't been idle. He's had a lot going on and is back with a rockin' new single, "Tippin' It Up". The release date is currently unavailable.

Lovin' Lyrics: You've been off the scene for awhile, what's been going on? We're glad you're back!

Scott DeCarlo: Hey there, it’s great to be back. I took some much needed time to sort life out, find direction in music, love, how I live and where I live.  I married the love of my life who, just so happened to be and still is my best friend. I moved out of Nashville because the town is going insane with all of the unnecessary growth and bought a small farm back in South Central NJ.

Lovin' Lyrics: Some may not know this, but you're not only a singer/songwriter, but you're also a NJ police officer. Is there anything you've learned as a police officer that's crossed over into your music career?

Scott DeCarlo: I’m laughing inside. I learned that “politics” is the role in all areas of life. I saw it first in government work but it is the founding principle in music as well. It’s not what you know, how well you do what you do or how hard you try. If you wanna make it in the business you gotta know how to play the political game (I am terrible at it by the way). I left law enforcement completely last year because I realized that music, writing and performing is the fire in my soul. I need to do it or the fire will burn out. When you lose your soul, what do you have? I didn’t make the decision to run out and be a rock star, that’s not what true artistry is and the decision didn’t come easy either. I've built a true following from the ground up and I believe in follow through. Mostly I believe in the organic truth in the eyes staring back at you from the audience to the stage.

Lovin' Lyrics: You have new music on the way. Tell me a little about the new single and what else is coming down the pipe.

Scott DeCarlo: Ahh “Tippin It Up!” I'm excited about this for many reasons. I got to write it with Shane Minor who is also an ex cop and a friend of mine who has some big hits out there (“Chillin’It” by Cole Swindell and “Live a Little” by Kenny Chesney among so many others), he is difficult to get a write in with too. We got together and he’s like “Whatya got?” I mentioned a couple of ideas and then got to this one. I had in a voice note, played it for him and he’s like “yeah, lets do that one”. It excites me because it’s a bit different from the previous releases, but I was able to produce it with another friend and great producer in Nashville, “Brad Winters.” I’ve been getting out and about and doing some low-key shows in NY and NJ and the response has been huge so I can’t wait to see what radio thinks of it. Coming down the pipe, I’ve got a few songs up my sleeve that I’m considering releasing. I may actually release a ballad I wrote with J.Michael Harter called “What I Didn’t Do.” I posted a snippet of a video of it and it had hit like 2000 views in about 5 hours. That tells me either it’s really good, or I need to bury it! Lol!!!

Lovin' Lyrics: If you've learned one major thing since you've gotten into music, what would that one lasting lesson be and what advice would you pass on from your own life to those coming into the business?

Scott DeCarlo: There are so many lessons that I’ve learned that people getting into the business really need to live and learn for themselves. No one can tell you what your career will be and no one can tell you what it won’t be either. We create our own destiny as long as we keep control of ourselves. I would pass on that the music business is just that, “A Business” and you’d better remember that. But the music industry doesn’t make or break your business, the fans do. The FANS are what is most important, So, write for yourself, perform for your fans and live without the promise of tomorrow.

Lovin' Lyrics: We always ask who your influences are but how do you see yourself as an influence to someone else trying to make it?

Scott DeCarlo: I really, REALLY, don’t see myself as an influence. Maybe there’s someone just starting out and they see my persistence and ambition. I would tell them I don’t know if I’m too stupid to stop or too smart? Only time will tell. But maybe they’ll see my love for music, my need to perform and my need to give every ounce of my being in each and every performance and they’ll think that’s pretty influential.

Lovin' Lyrics: Can we expect a new video soon?

Scott DeCarlo: Yes we can! I did a live shoot for “Tippin It up” at a recent show and I am hoping to get out at least one more by year's end and hopefully more in 2017.

Lovin' Lyrics: What would you change about the current music industry if you were able?

Scott DeCarlo: I have never been a signed artist and have only had little interactions with booking agents and managers. I do this on my own and it’s working. I don’t really know the industry. Maybe that will change but I guess I’d like to see more new artists on the CMA Stage.

Lovin' Lyrics: You do a lot of charity work and giving back through your music. Tell us about some work that you do?

Scott DeCarlo: I couldn’t pin point one charity really. If something touches my heart and I can help, I’ll give and perform whatever I can. I used to do a yearly Christmas benefit and we’d choose a new charity each year to donate to but mostly the charities that benefit children get my attention.

Lovin' Lyrics: If you could sum up Scott DeCarlo in one word, what would it be and why?

Scott DeCarlo: “Happy!” I get to wake up everyday next to the woman I love, write the music I love, perform for the fans I love and live life forward. Live and learn, appreciate all experiences, never forget where I’ve been but have no regrets.

You can find previous singles from Scott on iTunes. Keep an eye out for the new single, "Tippin' It Up" and if you like it, please request it on your local stations and tell people about it. Keep the love of music going.
Posted by LovinLyrics at 9:38 AM