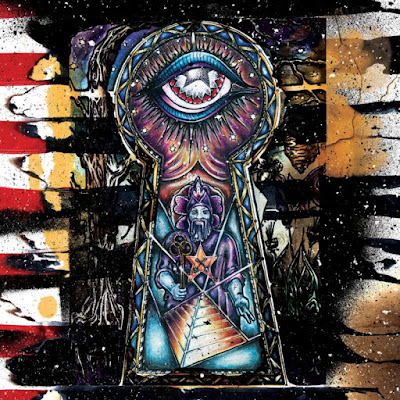 Shooter Jennings recently announced the newly packaged and remastered version of his critically acclaimed groundbreaking album Black Ribbons: The Ultimate Edition to hit stores on Election Day, November 8, 2016. Pre-orders are available now at BRCMedia.com, and the amazing bundle will include double vinyl LP and CD copies of the remastered record, an extras CD of previously unreleased tracks, a digital download including over six hours of additional content and a collectible card.

The genre-breaking, dystopian concept album is narrated by famed horror author Stephen King and is set in the near future, when the U.S. Government has control over the airwaves and a lone radio DJ vows to play the one band the authorities forbid him to play. The album takes the listener on an incredible multi-genre, anti-establishment infused journey that brings you right back where the album was conceptualized - truth and awakening.

He is supporting the new album with a provocative limited audio series entitled "Beyond The Black," which takes music lovers song by song through the story of Black Ribbons and how the concepts and theories behind the project still ring true today. He also dishes on politics, conspiracy theories and more on the weekly series, which is available now at beyondthe.black.

The SiriusXM Outlaw Country tribute to the late Colonel Jon Hensley is now on demand. The larger-than-life manager, who was no stranger to Shooter's fans, also had a hand in producing Billy Don Burns: A Night In Room 8 with Shooter. Fans can hear the likes of Greg Garing, JD Wilkes, Jessi Colter, Julie Roberts, Billy Don Burns, Josh Morningstar and Tommy Townshend on the special episode. #forthecolonel#formarty

For the past three years, Shooter has been performing with Waymore's Outlaws - three of Waylon's original musicians and lead singer Tommy Townsend. He recently announced the beginning of a farewell tour with the foursome. Shooter will soon be touring with his own band, and Waymore's will kick off their own tour beginning in February 2017.

Posted by LovinLyrics at 8:13 AM