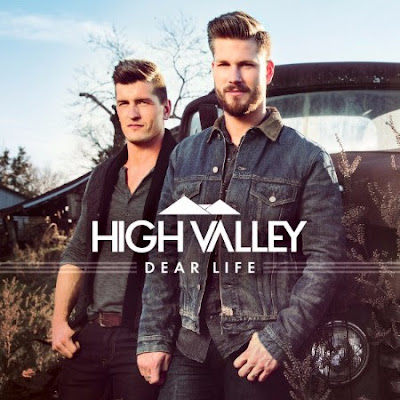 As HIGH VALLEY surpass more than 10 million music streams, the pair are preparing for the release of their major label album debut  – DEAR LIFE – November 18 on Atlantic / Warner Music Nashville. The project is available for digital pre-order now at http://smarturl.it/hvdearlife. Everyone who pre-orders the album on iTunes will receive one song download each week for five weeks leading up to the record’s release next month, starting with the Top 30 and climbing lead single, “Make You Mine.”

High Valley Dear Life album bundles, including everything from the new CD and 11-song digital download plus a signed “Make You Mine” lyric poster and more, start at only $19.99 and can be purchased at the official website, HighValleyMusic.com.

The 11 songs that make up High Valley’s Dear Life, produced by Seth Mosley, reflect the hope of a life well-loved and well-lived. The band enlisted its dedicated fans to choose each of the tracks on the album, making their selections via the High Valley app. The high energy hit and first single from the upcoming record, “Make You Mine,” is written by High Valley’s Brad Rempel along with Ben Stennis and Mosley and has already accumulated more than 5.75 million streams.

“This album is like a letter to life, asking questions about the future, saying what we’re thankful for, but also admitting that it's going by so fast and we're hanging on for Dear Life” said High Valley’s Brad Rempel. “We’re so pumped to have this chance to share our music with so many new fans and thankful for our diehard fans who have supported us over all the years and allow us to live this dream,” continued High Valley’s Curtis Rempel.

The duo continue to catch the attention of critics, being named “Artist To Watch” by Taste of Country, CMT, Spotify and “Country Song of the Summer” by Billboard. High Valley headlined their successful “Make You Mine Tour” over the summer and will join Martina McBride on her “Love Unleashed Tour” this fall, kicking off tonight in Poplar Bluff, MO.