TY HERNDON RETURNS WITH THE MOST POWERFUL RECORD OF HIS CAREER 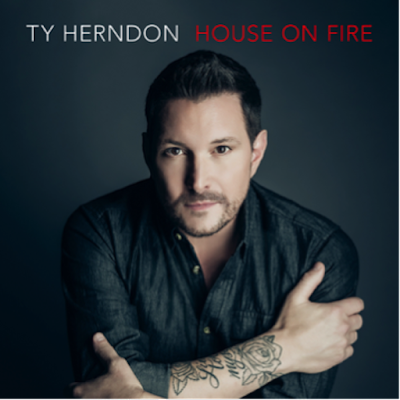 Ty Herndon’s much anticipated, full-length album House On Fire is now available for pre-order on iTunes and Amazon. From track to track, Herndon has made the most engaging, meaningful and fulfilling music of his career. Featuring Herndon’s powerful trademark vocals, the new album is already receiving critical accolades and showcases a deeper, greater strength from a man who has been there and back and has lived to tell about it. House on Fire is the next evolution of Ty Herndon.

House On Fire is a collection of 12 new contemporary songs, which are co-produced by Herndon and Erik Halbig, with Drew Davis joining as co-producer on six of the songs.

“This album is 18-months in the making. The writing was intense at times, but we had a lot of fun throughout the process! This album is me to the very core of my heart and it is without a doubt the most honest and vulnerable album I've ever done. It is an album about heart and soul, with songs that everyone can relate to. My hope is that anyone who hears these songs will catch a small piece of his or her life through the music and my story,” said Herndon.

The award-winning vocalist has also released a video to accompany his first single from the album, “That Kind Of Night.” The video is streaming exclusively now on RollingStone.com.

Herndon recently signed with BFD through Sony/RED Distribution, which marks Herndon’s return to the Sony family, where he made his chart-topping debut in the mid-90s. Herndon is also booked by Nashville-based agency, Buddy Lee Attractions.

Herndon’s 20-year career has resulted in an impressive string of hits, which includes four No. 1’s (“What Mattered Most,” “Living in a Moment,” “It Must Be Love,” “Loved Too Much”), as well as numerous top 10 hits, including “I Want My Goodbye Back,” “Loved Too Much,” “A Man Holding On (To a Woman Letting Go),” and “Hands of a Working Man.” He’s had 20 Billboard charted singles to his credit, numerous industry awards, and more than five million albums sold. For more information on Ty Herndon, please visit www.TyHerndon.com.

8) If You (Walker Hayes, Erik Halbig)