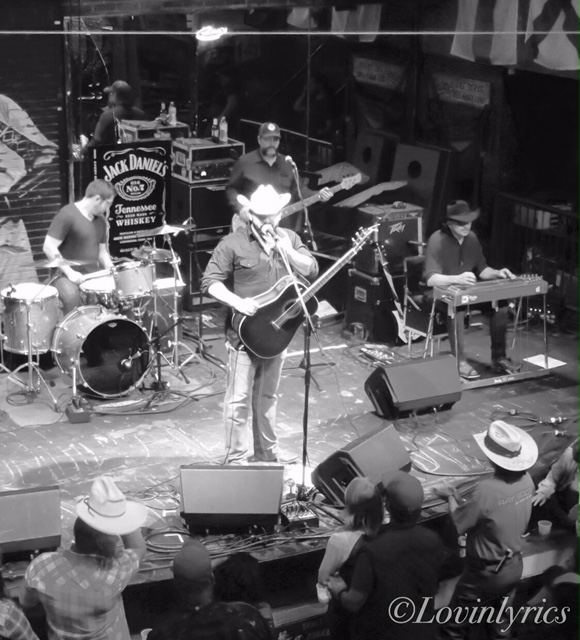 I have to admit, in today's country music market, there is literally a small handful of artists I would take unpaid time off from work and drive 3 hours to see. I've done it once for Ray Scott a few months ago and did it again this past Friday. It was totally worth every bit of it. When an artist is as genuine, unapologetic and fun as Ray, you don't let a chance to catch his live show pass by. You just don't. He is so interactive with the crowd and entertaining, not only in his music but in his attitude that you kinda get a music performance and a comedy show wrapped up in one tour stop. Ray is the ultimate rule bender, irreverent and blunt in his lyrics and storytelling yet he manages to stay within that traditional boundary. He's seriously not like any other artist out there and that's why fans love him. You WILL wind up laughing most of the night while trying to sing along with his uniquely styled songs. He brings something strangely different and at the same time familiar to each performance and this is what keeps him an Opry favorite, having graced the stage more than 50 times. The rest of the country, and world for that matter, is catching on. He's had several #1 hits in Europe and has done multiple international tours and his videos for "Those Jeans" and "Drinkin' Beer" were big hits here in the states.

The Mason Lovette Band, a local NC band, took the stage first. I hadn't seen them before and really enjoyed their performance.Great choice to get the crowd up and running, very energetic and interactive. Check them out at www.masonlovette.com. Ray and his band took the stage about 10:30pm to an anxious crowd. He has one of the best live bands and you can tell they have a good time doing what they do. The talent on the stage with Ray every night is top shelf and are so entertaining to watch and listen to. Mike Bourque is a bad ass who can rip an electric guitar like no one's business, drummer Nick Diomedes is a familiar name around Music City who been featured on various projects including "The Scarecrow Project" as the drummer on  "Long Way To Rest" a duet between 2016 CMA New Artist of the Year Maren Morris and Texas troubadour Derek Larson, bass player Tommy Michael keeps things thumping and is like The Godfather watching over the stage, and steel player Troy Klontz was the longtime steel player for Brooks and Dunn. Ray Scott doesn't play around when it comes to choosing his band. He settles for nothing but the best which means YOU get the best at every show. That's exactly what we got at his City Limits Saloon stop. He played our favorites and had us laughing through most of them, he kept it familiar and didn't bombard us with a bunch of new stuff we couldn't sing along to. He did play one song, "The Fire", from his upcoming new album which was a (pardon the pun, or don't), surefit hit. The song is a little more contemporary than Ray Scott fans might be used to, but no worries, you're not gonna get any rap or pop, it's just a little different but still in the "Ray Realm". This one is gonna turn heads for sure and hopefully the right ears. Ray sang all of his fan favorites like "Put Another Log on the Fire", "Grumpy", "Dirty Shirt", "The Ugly One", "Her Ol Man", "These Jeans", "Drinkin' Beer" and many others. Ray and the guys gave us a great performance and left us all singing questionable lyrics in our heads all night. Tip one back for Ray Scott, tip another one back as a thank you for his keeping it real! Keep this up, we'll all be drunk by the encore! HA!

Check out the rest of our photos below!