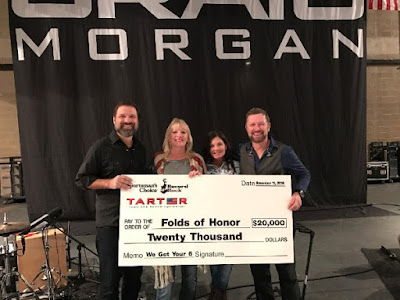 Country music entertainer, TV host and former soldier CRAIG MORGAN honored our United States military veterans over the weekend during his “American Stories” concert experience tour stops in Washington, D.C. and Roanoke, VA. Joined by his daughter Alexandra, Third Day front man Mac Powell, best-selling author (American Wife) and Veterans’ family activist Taya Kyle, songwriter/producer Phil O’Donnell (“Give It All We Got Tonight,” “Back When I Knew It All”), Morgan and friends celebrated American values and the service of our men and women in uniform through music and storytelling.

Nearly 200 members of the Armed Services and their families were given complimentary tickets to attend the show at Washington D.C.’s Warner Theater courtesy of the USO, with The Washington Post sharing the unique concert experience. The following night at Berglund Center in Roanoke, VA, Morgan presented a $20,000 donation to Folds of Honor on behalf of Record Rack® and Tarter. Folds of Honor provides educational scholarships to families of military men and women who have fallen or been disabled while on active duty in the United States Armed Forces. In addition, with the help of Record Rack® premium game feeds, five veterans were selected to win a once-in-a-lifetime hunting experience at Rancho Bellas Rocas along with an assortment of hunting gear.

The Black River Entertainment recording artist’s ninth album, A Whole Lot More To Me, released June 3rd and includes “I’ll Be Home Soon” and “When I’m Gone” along with the inspiring ballad “Hearts I Leave Behind” with Mac Powell. Co-produced by Craig and Byron Gallimore (Tim McGraw, Faith Hill, Lee Ann Womack), Morgan co-wrote nearly half of the album's tracks with some of Music City's hottest writers like Josh Osborne, Kevin Denney, Jim McBride and Phil O'Donnell.
Posted by LovinLyrics at 7:34 PM