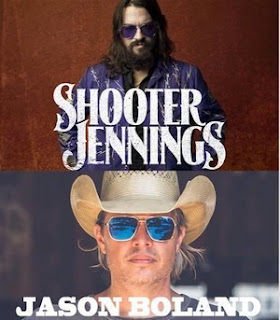 Jason Boland, one of the leading lights in the Red Dirt music scene, and eclectic singer/songwriter/producer Shooter Jennings have teamed up for a tour that will hit 10 markets beginning December 9, 2017. The unique acoustic tour will see the two share the stage for the entire show, swapping songs and stories about music and the road.

Friendship between the two creative minds dates back at least five years, when Shooter co-produced Jason Boland & The Stragglers' Rancho Alto album in 2011. Soon after Shooter signed with Red 11 Music for booking this year, the company's Jon Folk suggested they hit the road together.

On election day he released Black Ribbons: The Ultimate Edition, a remastered version of his 2010 genre-breaking, dystopian concept album narrated by famed horror author Stephen King. He supported the new album with a provocative limited audio series entitled "Beyond The Black," which takes music lovers song by song through the story of Black Ribbons and how the concepts and theories behind the project still ring true today. He also dishes on politics, conspiracy theories and more on the weekly series, which is available now at http://beyondthe.black.