Upcoming Album 'Did It For The Party' Slated for Third Quarter Release, With Accompanying Summer Tour 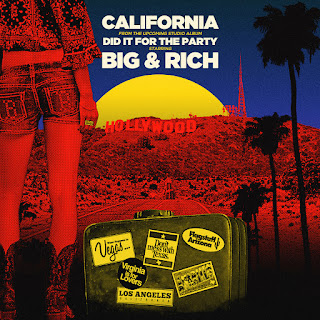 Country hit makers Big & Rich aren’t wasting any time getting the party started with their upcoming single, “California,” which will impact country radio in March and be available for purchase March 6. “California” will also be promoted through a new partnership with cookie bar TWIX®, which will begin promoting the single in Walmart® stores nationwide in April.

“California” will serve as the lead single for the larger-than-life duo’s upcoming album, Did It For The Party. The project is slated for a third quarter release and will be Big & Rich’s sixth studio album. Big & Rich Records are excited to team up with Thirty Tigers and Sony RED for marketing and distribution for Did It For The Party. The Technicolor Cowboyz will also be hitting the road this summer for the “Did It For The Party Tour,” which will see Big & Rich performing at stadiums and top festivals throughout North America, with more dates to be added (see dates below).

As previously reported, Big & Rich will be featured on Westwood One’s Super Bowl LI Game Day Coverage on February 5. Fans can listen to an exclusive remixed version of their song, “Party Like Cowboyz,” which will be the opening theme, mixed with highlights and sound bites from the two participating teams in their quest for the Vince Lombardi Trophy. The broadcast is presented by Westwood One Sports, the official network radio partner for the National Football League, providing comprehensive coverage of Super Bowl LI, live from NRG Stadium in Houston Texas, where the Atlanta Falcons will battle the New England Patriots.