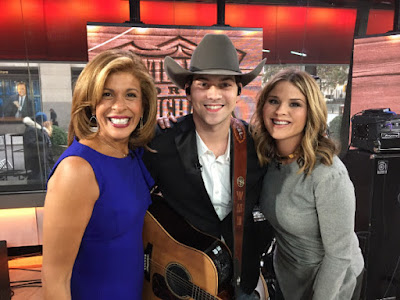 William Michael Morgan kicked off the new year with Hoda and Jenna on NBC’s TODAY, making his national TV debut on January 4 performing his No. 1 hit “I Met A Girl."  The poignant song, along with his newest single, “Missing,” are featured on his recently released critically acclaimed debut album VINYL. Click here to see performance - http://on.today.com/2hRo3TN

Morgan’s debut effort lands him on many year-end best albums lists, including Rolling Stone, iTunes, Saving Country Music, and top song of the year nods for “I Met A Girl” from Billboard and NPR.  The New York Times declares “…in the emergent field of gentleman country — an antidote to the bros of the last few years — William Michael Morgan stands tall.”  The praise continues, referring to “Vinyl” as a “sturdy, reflective debut album….  a throwback to the temperate wisdom of midcareer George Strait.”

The 23-year-old Vicksburg, MS native will join country music stars Lee Brice and Justin Moore on the “American Made” Tour with dates starting in January.  His breakout mega-hit “I Met A Girl,” which topped Country Radio charts and SiriusXM’s “The Highway” Top 45 Countdown chart, has garnered over half a billion audience impressions, including over 20 million on-demand streams. His critically acclaimed album VINYL debuted in the Top 5 on Billboard’s Country Albums Chart.