"LARRY'S COUNTRY DINER" TO FEATURE RIDERS IN THE SKY AND ALL NEW EPISODES WITH DALLAS WAYNE, JEANNIE SEELY AND EXILE IN JANUARY 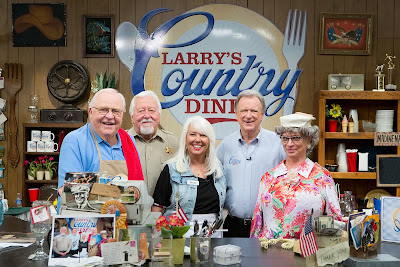 Hit television series, “Larry’s Country Diner,” will continue to entertain audiences nationwide on RFD-TV with some fan favorite episodes from earlier this season. In January, the series will feature a re-airing of guest stars Riders in the Sky to kick off the month followed by brand new episodes featuring Dallas Wayne, Jeannie Seely and Exile. With a stellar lineup of some of country music’s greatest artists and entertainers, along with stories and family-friendly entertainment, it will be an exciting month on “Larry’s Country Diner” that fans won’t want to miss.

To inquire about how to attend an upcoming taping, where you can have a front row seat at “Larry’s Country Diner” and be part of the on-camera studio audience, please call Gabriel Communications at 800-820-5405.

Owned and produced by Gabriel Communications, “Larry’s Country Diner” is one of the top-rated programs airing on the RFD-TV network, which is No. 9 among all cable networks in growth since 2011. It receives 1.6 million viewers per month.

For more information on “Larry’s Country Diner,” please visit larryscountrydiner.com
Posted by LovinLyrics at 10:31 AM