Reigning ACM Vocal Group of the Year Announces Canadian Dates in April
On Heels of Notching 2016’s No. 1 Most Played Song in Canada 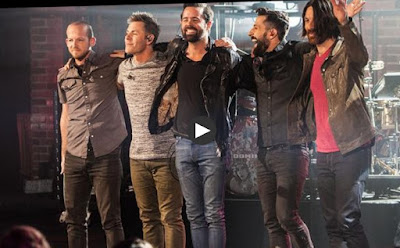 In a new episode that begins airing today, Feb. 9, road-built band Old Dominion will take over the revered PBS’ Soundstage, performing select songs from their debut studio album, Meat and Candy, including the chart-topping two week No. 1 “Break Up With Him,” Mediabase’s 2016 No.1 most played song in Canada, “Snapback,” and their latest No. 1, “Song For Another Time.” The five-piece band joins an iconic lineup on the timeless music program, now in its tenth season, which has featured performances by Bob Dylan, Aretha Franklin, Tom Petty, Emmylou Harris, Sheryl Crow, Jason Isbell and many more.

Having just wrapped their headlining Meat and Candy Tour - which included 15 sold-out stops, co-branded as the inaugural Stagecoach Spotlight Tour, and garnered the band rave reviews for being “polished, poised and having a good time — which show[s] in the audience response” (St. Louis Post-Dispatch) – Old Dominion recently joined Miranda Lambert’s Highway Vagabond Tour which will continue through March 19 in addition to performing select headlining dates. They will launch their first major run in Canada in April, with newly announced dates as follows:

Additional tour dates and ticketing information is available at www.olddominionband.com.
Posted by LovinLyrics at 8:58 AM