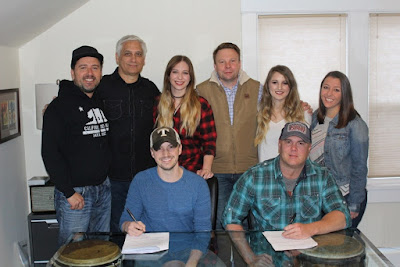 With several notable cuts under his belt by artists such as Montgomery Gentry, Justin Moore, and hot country newcomer William Michael Morgan, Bates offers a unique perspective to today’s fresh talent having spent his own time as a successful solo artist on Republic Nashville. The Nashville native hit Top 5 with “Did It for the Girl” and has further made his mark as a multi-talented songwriter, producer, singer, and guitarist.

"I'm so excited to be joining such an amazing team of staff and writers at Liv Write Play,” Bates shares. “I look forward to future successes at this new creative home.”

“Greg is a very in-demand writer in Nashville. We know how fortunate we are to have him,” says Ilya Toshinskiy, Liv Write Play, LLC Partner. “With his kind of talent and versatility, he’ll be able to fit into so many different writing situations. His potential is unlimited.”

“I’m grateful to be a part of the excellent team that Liv Write Play has assembled,” Black adds. “Their great work ethic and commitment to their writing staff has me excited about what the future holds. I'm thankful we partnered for my next chapter!”

"I’m thrilled to be a part of Liv Write Play. I feel like I’m coming on board at the perfect time,” Goodvin admits. “I’m excited to join this extremely talented team and play a part in helping this company reach its full potential.”

“Greg and Skip complement our team and fit well with our family-oriented company. We’ve been blown away by their work ethic and creativity and are looking forward to working with them to craft some incredible songs,” says Dennis Kurtz, Liv Write Play, LLC VP and Partner. “Victoria brings her unbridled passion for country music and an extensive knowledge of songs and songwriting. Her efforts will inspire and enable the creative process for our writing team and staff.”