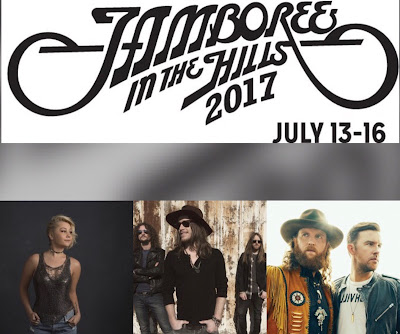 Ten more artists have been added to the action-packed 2017 JAMBOREE IN THE HILLS festival lineup, bringing some of the biggest names in country music to Belmont County, Ohio, from July 13 – 16.

Back this summer for the 41st time, this year’s Jamboree In The Hills festival will kick off in welcoming style, with Jambo veteran Neal McCoy and local favorites Township Road performing a FREE Wednesday evening (July 12) concert, sponsored by Panhandle Cleaning & Restoration.

The rest of the 2017 lineup will be revealed soon.

One of the longest-running and best-loved country festivals in the world, more than 100,000 diehard fans are expected to soak in four days of incredible music at Jamboree In The Hills, along with all the camaraderie and traditions they have come to know and enjoy – the famed “Redneck Run” each morning, opportunities for up close and personal photos and weekend-capping fireworks included. As always, fans are welcome to bring in their own coolers and beverages, with the same rules of entry applying as in the past (no liquor or glass containers).

Multi-day camping, VIP passes and single-day tickets are still available via www.jamboreeinthehills.com, onsite at the Belmont venue or by phone at 1-800-594-TIXX.