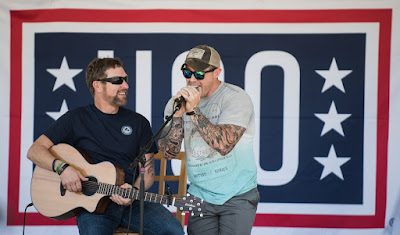 This trip marked Morgan’s second USO tour with the Vice Chairman, having traveled with him on an eight-day, seven-country USO tour in March 2016. Portions of the trip were later highlighted on PBS Film’s USO–For the Troops, which celebrated the USO’s 75-year anniversary.

Morgan first volunteered with the USO in 2002 and is a USO Merit Award recipient who has gone on to participate in eight USO tours, where he has entertained more than 37,000 service members and military families in 12 countries.  Among the countries Morgan has visited with the USO are the U.S., Guam, Japan, Afghanistan, Iraq, Kuwait, Greece, the United Kingdom, Portugal, Diego Garcia, Qatar and Italy.  Prior to making it big on the country music scene, the singer/songwriter spent more than 10.5 years of service in the U.S. Army and an additional 6.5 years in the U.S. Army Reserves.  This marks his eighth tour abroad with the USO and his fourteenth overseas tour for our troops.

Declared “a mature record that, while not afraid to have a little fun, values poignancy over pop country,” (Rolling Stone Country) Morgan’s newest album A Whole Lot More To Me is available now and the eighth season of his award-winning TV series Craig Morgan: All Access Outdoors will debut on Outdoor Channel this summer. For more information, visit www.craigmorgan.com. You can also engage with Craig on social media. His official social media accounts are shown at the top of his official website.

Please note there are fake accounts posing as Craig and other celebrities online. Craig's social media accounts will be verified with a blue check mark and the only accounts he has are linked on his website.
Posted by LovinLyrics at 1:52 PM