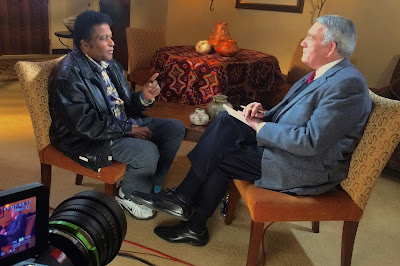 Upcoming episodes of the AXS hit show “THE BIG INTERVIEW" with Dan Rather will feature some of the biggest names in music throughout the month of June. Interviews include Kid Rock, Charley Pride, Meat Loaf, Kenny Rogers, Dolly Parton and more. Don’t miss as each star sits down for an hour-long interview with host, Dan Rather, to discuss and relive some of their biggest career defining moments. Aired nationally, “THE BIG INTERVIEW" features thought-provoking, in-depth interviews with some of the most talented artists from across the entertainment industry. Fans can find future airings and purchase episodes in-full HERE.

Groundbreaking country music icon, Tanya Tucker, joins Dan Rather on “THE BIG INTERVIEW” for an intimate hour-long discussion. The beloved singer, songwriter, and former child star opens up about her battle with depression, overcoming a disfiguring chemical peel in 2008, and how her faith has helped her heal. Tune in for Tucker’s interview Thurs., June 15 at 9 a.m. ET.

GRAMMY®-winner Charley Pride speaks with Dan Rather for a detailed interview set to re-air on June 15 at 10 a.m. ET. During the candid hour-long conversation, the beloved country music pioneer opens up about his early life as one of 11 children, picking cotton in the fields of the Mississippi Delta, as well as his introduction to music, the songs that inspired him, and his first guitar.

Meat Loaf visits with Rather for a closer look into his musical talents on “THE BIG INTERVIEW.” The unique artist discusses his album Braver Than We Are and speaks about topics including his music, the success behind it all, and the heart of his career. Meat Loaf’s in-depth discussion will re-air on Sun., June 18 at 9 a.m. ET.

Charlie Daniels sits down with Rather for an intimate and in-depth interview at Daniels’ recording studio in Mt. Juliet, Tennessee. In the candid discussion, Daniels opens up about his youth in the Civil Rights Era south, breaking into the competitive Nashville scene, his signature hit “The Devil Went Down to Georgia,” life on the road and more. Catch his interview Wed., June 21 at 9 a.m. ET.

GRAMMY®-winning songstress Crystal Gayle sits down with Dan Rather and opens up about her celebrated career, her most enduring songs, and her relationship with sister - and fellow superstar- Loretta Lynn, among other topics. Gayle’s episode will re-air Fri., June 23 at 9 a.m. ET.

Country music icon, Kenny Rogers, visits Dan Rather on “THE BIG INTERVIEW” for an exclusive interview. The two discuss Rogers’ groundbreaking career and the feeling of what it is like to be inducted into the Country Music Hall of Fame. During his in-depth interview, the ‘The Gambler’ artist allows a closer look into his career and shares the basics of where it all began for him. Catch Kenny Roger’s interview Sun., June 25 at 9 a.m. ET.

The legendary Dolly Parton sits down with Dan Rather on “THE BIG INTERVIEW” to discuss all the important moments of her distinguished career — from her diverse music and acting career, to running a multi-million dollar business with a touch of her devotion to the philanthropic foundation, Dolly Parton’s Imagination Library. The two also look into Parton’s personal life. Be sure to tune in for the interview Sun., June 25 at 10 a.m. ET.

Rather has found his best format...kudos