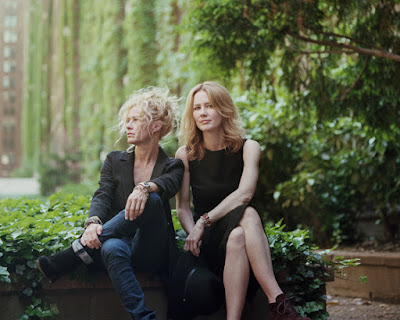 “these two voices share such a deep genetic imprint that it can be hard
to tell them apart - Lynne and Moorer communicate how resilience
develops from the admission of vulnerability." - NPR Music

Critically acclaimed artists and sisters Shelby Lynne & Allison Moorer have announced select tour dates in support of their highly-anticipated upcoming release Not Dark Yet. The new album, which will be released on August 18th (Silver Cross/Thirty Tigers), was produced by Teddy Thompson and recorded in Los Angeles last summer. NPR Music unveiled an exclusive first listen of the album’s title track "Not Dark Yet" today. Click HERE to listen.

The shows start in New York City with two nights at City Winery, followed by stops in Boston, Philadelphia, Annapolis, Alexandria, Chicago, Nashville, and Atlanta. Shelby and Allison haven’t toured together since 2010. For a taste of the pair’s incredible musical bond, please listen to this in-depth All Things Considered feature that highlights their emotional live performances. Click HERE.

Raised in rural Alabama, Shelby Lynne & Allison Moorer sang together from the time they could speak. Though their career paths have gone in separate directions, music has been the only language they needed to communicate and connect with each other. On Not Dark Yet the sisters wrap their soulful familial harmonies around an eclectic collection of song choices by writers ranging from the Louvin Brothers, Nick Cave, Kurt Cobain, to Jessie Colter. With 24 albums between them, as well as Grammy, Oscar, and numerous other nominations, this is the first time that Shelby Lynne & Allison Moorer have collaborated on an album. Not Dark Yet is an extraordinary debut of their transcendent musical bond.

Posted by LovinLyrics at 3:01 PM