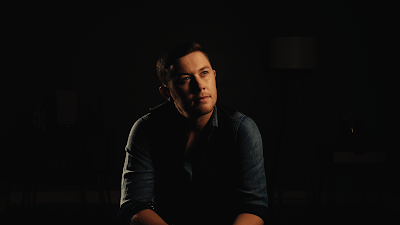 Now that he has released his emotional and reflective single “Five More Minutes,” the question that country entertainer Scotty McCreery is asked most often these days is “When is the video coming out?” The wait is just about over as People.com will debut the highly anticipated music video on Monday, June 12 at 10:00 am ET (9:00 am CT). The video was directed and produced by cinematographer Jeff Ray.

McCreery wrote “Five More Minutes” with Frank Rogers and Monty Criswell two weeks after his paternal grandfather died. The song reflects upon some of the events and people with whom he’d like to spend five more minutes, and the music video elevates that concept even higher by showcasing never before seen home video footage of McCreery’s early life intercut with scenes of the 23-year-old singer today as he performs the song to camera. The video is dedicated to both of his grandfathers and each are featured in the home video footage. Another highlight from the video is experiencing McCreery and his longtime girlfriend Gabi Dugal’s relationship growing from their early grade school photos to their high school prom night to a recent helicopter ride while visiting Hawaii.

“I’ve said before that ‘Five More Minutes’ is my favorite song I’ve ever written, and I think this music video may be my favorite video yet,” said McCreery. “This was the first time I had seen a lot of this home video footage. Having the chance to see both of my grandfathers again and to relive some of the experiences from my younger days brought both tears and smiles to my face. Just like the song, it brings back so many great memories. Jeff Ray did an incredible job of honing in on so many special moments from nearly 50 hours of home video footage. I’m very proud to share this with everyone.”

Since its release on May 5 when it quickly became the No. 2 country single and No. 9 all-genre single charted on iTunes, “Five More Minutes” has currently received more than 2 million streams on Spotify. It is currently at No. 50 on the Billboard Country Airplay Chart, after being named the “Hot Shot Debut” last week. On the day of release, legendary Country Music Hall of Fame member Randy Travis tweeted McCreery about “Five More Minutes,” saying that “this is storytelling and country music at its best.” McCreery performed the song for the first time live on national television on “FOX & Friends’ All-American Summer Concert Series” last Friday, June 2. A live video of the ACM, BMI and CMT Award winner performing the song on the Grand Ole Opry has received nearly 3 million views on the Opry’s YouTube channel. Last Saturday’s premiere of “CMC Songs & Stories: Scotty McCreery” on Australia’s Country Music Channel (CMC), which centered around an acoustic performance of “Five More Minutes,” was the network’s most watched broadcast of the weekend. The song, which has become a staple in McCreery’s concerts over the last year, continues to receive a standing ovation every time it is performed live.

McCreery made history in 2011 as both the first country artist and the youngest male artist of any genre to debut his first studio album, the Platinum-certified Clear as Day, at No. 1 on the all-genre Billboard Top 200 album chart. He has gone on to see all three of his albums debut at No. 1 on a Billboard album chart, with current sales nearing 3 million copies. He’s earned one Gold single and three Platinum singles and achieved two Top Ten hits with “Feelin’ It” and “See You Tonight.” The latter song earned McCreery both his first BMI Award for writing one of the Top 50 Country Songs of 2015 and his first Music Row No. 1 Challenge Coin. He was named the ACM New Artist of the Year Award in 2011, won the CMT Music Award for Breakthrough Video of the Year (“The Trouble with Girls”) in 2012; and American Country Awards for new Artist of the Year in 2011 and Breakthrough Artist of the Year in 2013. In 2016, McCreery released his first book, Go Big or Go Home: The Journey Toward the Dream. For more information and his current tour schedule, visit www.ScottyMcCreery.com.
Posted by LovinLyrics at 4:44 PM