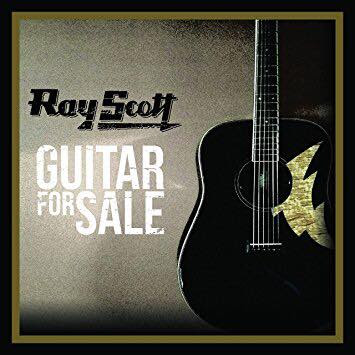 #GuitarForSale is available now for pre-order on iTunes and Amazon.

In today's crush of country artists, there's one name that constantly stands out to me, Ray Scott. You won't find him selling out arenas or shaking his "moneymaker" on stage in a pair of nut-crushing designer jeans, instead, you'll find him perfecting his craft in smaller venues in front of more intimate crowds who love the real stuff, know every single lyric and know every song from the early years to his current single. Just a man and his guitar. You'll always find him somewhere between Haggard, Jennings, Jones and sometimes a little Ray Stevens.

Ray Scott may not be a household name but he is hardly an unknown. He's been performing nationwide since 2003, landing a record deal with Warner Bros in 2005 which produced his "My Kind of Music" CD which spawned 3 singles. After leaving Warner Bros, Ray took the path of an independent artist which is where he's built his following and really cemented his reputation in Nashville as a serious (if you can use that term in conjunction with someone who is rarely serious) country artist and songwriter. It was his hit single, "Those Jeans" that put his name on the map. The song was a hit both on Sirius XM's The Highway and a top requested video on GAC. To date, he has performed over 50 times on the historic Opry stage and he tours overseas every year. Ray is like country music Viagra, he's got staying power and provides hours of enjoyment.

His new CD, "Guitar for Sale", hits shelves tomorrow but for those fans who participated in his crowdfunding campaign and got their copy early are already giving it well deserved praise as are country music reviewers. This CD may be titled "Guitar for Sale" but the quality of the music on this project proves that Ray's creativity and talent are not. The songs on this CD come straight from Ray, a departure from his normal comedic schtick, they're like Ray himself, a little dark and moody yet personally relatable. The music on this CD comes from some of the industry's finest country musicians and the production of this CD comes straight from Nashville, not some misplaced pop production team. This may very well be Ray's springboard onto (gulp) country mainstream radio, if
they show any common sense.

This one's well worth every spin and I think Ray's going to find himself with an even larger base of new fans.

Hey Ray, we love your kind of music!

Connect with Ray online. He's one of the most personally engaging artists on social media. It's all 100% Ray who responds because no social media manager could ever engage like Ray does with his fans.

Posted by LovinLyrics at 9:11 AM