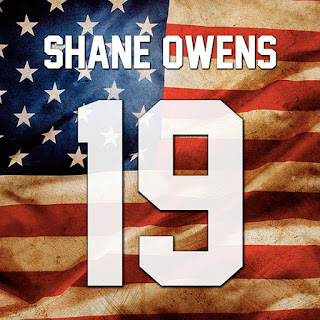 Shane Owens’ patriotic tribute song, “19” will pull at your heartstrings. Arguably one of the best written songs about our military, the lyrics are a sobering reminder of the dangers our military members face every day. Click here to purchase “19.”

Fans of Owens can also catch his song “Country Never Goes Out of Style” in Season 3 of the Netflix original series “The Ranch”, starring Ashton Kutcher, streaming June 16.

“19” tells the story of a local football star signing up for the military straight out of high school following the terror attacks on September 11, 2001. In the end he pays the ultimate sacrifice as the song alludes to a life cut short. Written by Jeffrey Steele, Tom Hambridge and Gary Nicholson the song brings to life an important message about the true American heroes, rarely heard on the radio today.

The song is connecting with audiences everywhere, getting high praise from military families. Nearly every live performance of “19” has Owens’ hearing another story of personal loss reminding us this story is being lived out in cities and small towns all over this country.

Here is a recent excerpt from a letter Owens received from a Gold Star widow:

"It's the song, "19" that helps the listeners to remember there are those who are willing to give up high prospects and opportunities in life to serve for our nation and her freedoms! As a person living overseas in a US Army community and the widow of a fallen Soldier, I have daily reminders of the fine folks who serve and the families who sacrifice every day in the service of our nation and her people. Shane, your song reminds the high percentage of other Americans, who sometimes don't have the daily reminder, to remember and be thankful! Thank you Shane Owens for singing and helping keep the memory alive of the fallen while being a positive reminder of the sacrifices of our freedoms as Americans”

The Neo-traditional country singer is always looking for ways to support our military. Owens is donating 100% of net proceeds of this single to the TAPS organization. The TAPS organization offers help, hope, and healing to all those grieving the death of a loved one serving in America’s Armed Forces. Owens recently performed “19” on Fox & Friends over Memorial Day weekend as a tribute to our service men and women, and to highlight the TAPS partnership. Click here to watch his performance.