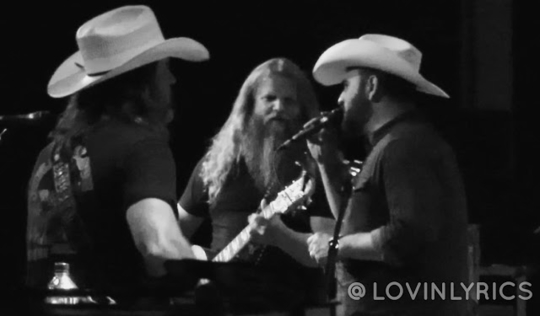 I'll go ahead and preface this review with this simple fact: I "listened" to this performance instead of just "hearing" it. Jamey Johnson and Ray Scott taught me that difference and made me truly realize it tonight. I'll also add that I hate my photos aren't the normal quality they normally are. I had to use a different camera this time.

First off, I have to say how wonderful the Roanoke Rapids Theater is - the venue itself and it's staff. The acoustics in this beautiful theatre were amazing. The theater was built in 2005 and was owned by Dolly Parton and her brother Ray. Myself and I'm sure many other patrons in the area would love to see the city of Roanoke Rapids, NC really put themselves behind making this venue the success it should be. This place has the potential to be someplace really great for artists and fans alike if the right people will get involved and make it happen. Barn Burner Promotions does a wonderful job promoting the shows, handling the crowd and making sure each show is a success. You really get a great show here. The security is great, they aren't all up in your face but you know they're watching. The artists that have played here rave about the acoustics. It's really hard to beat for sound, location and atmosphere. To Julie. Allison and the whole Barn Burner/Roanoke Rapids Theatre crew, thank you for a great night.

If you haven't taken the time to get to know Ray Scott or listened to his music, he's an artist you should connect with and when it comes to connection, he's one of the best there is. Ray has always been a true country gentleman, even if some of his tweets and social media posts may give you another impression. His respect for this genre and it's fans, his simple and uncomplicated love of the music, his reflection of tradition and the way he treats others have always made him a stand out in my eyes and he only reinforced that Friday night. He treats everyone around him with kindness whether it be a tag along like me, venue staff, fans, or his band, it doesn't matter. He makes a point to engage and get to know people, to make eye contact and really listen to what they have to say. He makes a genuine connection without having to try. I love watching his interaction with those that come to see him, he makes sure they know their time and support is not overlooked. It's just who he is and in today's country music world, it's a hard thing to find and coming from someone who's known him for a few years now, I can tell you it's more than appreciated and something you can't help but support.

Ray and his band, the Guilty Bystanders, took the stage about 7:30pm and the crowd was already ready for this and having not seen these guys in awhile, I was too. He kicked it off with "Ain't Gonna Be You" and it was already loud with screams and "hell yeahs". You knew it was just gonna get better from here. If you go to a Ray Scott show, take the time to say hi to the guys in the band and let them know you appreciate what they do. They stand behind him every show providing some great music and they're all just great, down to earth people. Ray's fantastic on his own but with any artist, a great band like this one always makes them better and can take an average show to the next level and before you know it, you're at a party with a room full of strangers who become friends until the music stops and the show is over. But then too, Ray's shows are anything but average and Ray is true top shelf talent. I also can't leave out the guy that makes these shows happen, their tour manager, Brian. He's a hard working son of a gun and believes in Ray and his band and it's more the obvious that he loves what he does because he does it well.

Ray's set consisted of mostly original music including "Drinkin' Beer", "Ain't Always Thirsty", "Dirty Shirt" and music from his new album, "Guitar for Sale". I think this is his best album to date. It's somewhat of a departure from his usual comedic tunes, it seems to be more personal and coming from a deeper place. Who knew Ray had a deep place? LOL! Wherever it came from, the audience loved it and the CD's were selling like crazy at the merch table. He performed his latest single, "Livin' This Way", which y'all need to tell your local stations to think outside the corporate box and add it to rotation and put the "try" back in their country. He also sang my favorite, "The Fire", which is also on the new album. Hint, hint, I think this should be the next single. He wrapped up his set with 2 of his biggest hits, the GAC video hit, "Those Jeans" and the one that got him off and runnin', "My Kinda Music", well walkin' because I don't think I've ever seen Ray Scott run unless someones jealous boyfriend or husband was chasing him. The place got LOUD, I mean backwoods yee-haw LOUD.

Up next was Jamey Johnson and this was a religious experience for me complete with singing angels and voices of God. Tommy, Ray's bass player and a good friend, was kind enough to come out and get me and take me side stage to watch Jamey's show. I witnessed one of the most heartfelt and impactful performances I've ever seen from an artist. I left with a whole new outlook on music and a different view of Jamey. Jamey's had his share of problems and situations, but the Jamey I saw tonight seemed to be a different guy, a more focused and happy guy. What I saw was a man who loves what he does, has a deep love for the music and doesn't just sing these songs, he feels every word he writes and sings.

Jamey has one of the biggest and most complete band set ups I've ever seen for a country artist. His band consisted of a horn section, drums and percussion which included Tony "TC" Coleman who was the longtime drummer for BB King, keyboards, slide guitar, bass and guitar. He also has one of country's best and most angelic voices backing him up, Melonie Cannon, daughter of legendary producer and songwriter Buddy Cannon. It truly is an impressive set up.

He stood there in the spotlight, with his usual deep expression but this time there wasn't that blank stare, there was something different about him, something lighter and more "untroubled". It was almost like a weight had been recently lifted off his shoulders and whatever burdens he once dealt with were gone. It was something not only I saw but I'm sure anyone paying attention noticed. It truly caught me off guard. Having seen him many times before, this was like seeing and really hearing the real Jamey for the first time and man it hit me right in feels that I had no idea were even there. Watching him sing his songs like "The High Cost of Living", "Lonely at the Top", "Can't Cash My Checks" and doing a JJ rendition of Kenny Roger's "The Music Man" only made me wonder what was going through his mind and how those words have somehow connected personally in his own life. I caught myself getting choked up on my own emotion as I got caught up in his. That's what a great artist and great performance should do and that's exactly what Jamey Johnson did. I'm pretty emotional and passionate about good music and this was just good music. Tonight, I didn't just hear, I listened and most importantly, I felt.

There were a few moments in the night that really stood out for me:

1.) His performance of "In Color" that he sang along with his 13 year old daughter and her friend. This performance was very strong while being very simple. To hear the audience sing the chorus back at him must have really done his soul good based on the smile on his face.I know it sure did mine good.

2.) His performance of "This Land is Your Land, This Land is My Land" - simple, patriotic and meaningful.

3.) His cover of the classic Bob Seger hit "Turn the Page" complete with the horn section. This song went over 6 minutes.

4.) He brought Ray Scott back on stage to sing a cover of the Waylon Jennings hit "Drinkin' and Dreamin'". This was country y'all.

I could keep going but I think I'll stop here, you get the picture. To sum it up quickly, this night was the best night I've enjoyed in a long time, really enjoyed from start to end. Thank you again to all of the great people who made this one for the memory books.

Posted by LovinLyrics at 6:11 PM