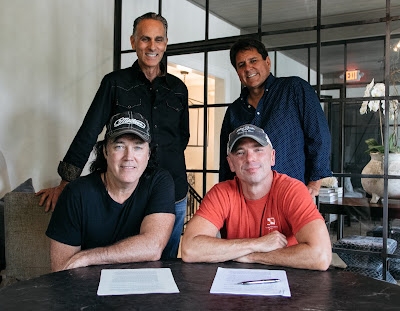 Platinum-selling country artist and prolific songwriter David Lee Murphy returns to recording with Reviver Entertainment Group. The man who defined country’s freewheeling spirit with the #1 “Dust on the Bottle” and Most Played Song of 1995 “Party Crowd” will release No Zip Code on Reviver Records.

No Zip Code will be his fifth studio album and the first album on Reviver Records for Murphy who, in a addition to his own career as a recording artist, has written more than 50 cuts, including chart-toppers for Jason Aldean (“Big Green Tractor,” “The Only Way I Know”), Blake Shelton (“The More I Drink”), Gary Allan (“A Feelin’ Like That”), Jake Owens (“Anywhere With You”), Eli Young Band (“Always the Love Songs”), Thompson Square (the Grammy-nominated “Are You Gonna Kiss Me (Or Not)") and Chesney (“Livin’ In Fast Forward,” “Pirate Flag”). In addition, he’s penned significant album cuts for Thomas Rhett, Luke Bryan, Florida Georgia Line, Brooks & Dunn, Brad Paisley, Montgomery Gentry, Reba McEntire, and Keith Urban.

“I didn’t think I’d ever get out here and do this again,” Murphy says. “You focus on writing, and that’s its own kind of great. But Kenny and I got to talking, and it seemed like something worth doing. Then when we got in the studio, it felt so good, every day was more exciting than the one before.”

“David Lee is the original – and the last of – the hillbilly rock stars,” Chesney, the man The Los Angeles Times calls “The People’s Superstar,” says of Murphy. “His groove, the way he lays into a melody is so smooth, yet he uses the words for shaping the rhythm. He knows the life, and he bottles it up in song. Making this record showed us what country music can be in the 21st century.”

For Cannon and Chesney, No Zip Code is a labor of love: both for the artist and the music. Cannon, who’s recently produced projects for Alison Krauss, Willie Nelson & Merle Haggard, Jamey Johnson, George Jones and Chesney’s last thirteen releases, has co-written classic songs for Vern Gosdin, Alabama, Mel Tillis, Reba McEntire and George Strait, including the 2007 Academy of Country Music Song of the Year “Give It Away.”

“We are thrilled to welcome David Lee Murphy to Reviver,” says CEO David Ross. “His songs, his style and this record are incredible. We can’t wait to get to work.”
Posted by LovinLyrics at 12:37 PM