SCOTTY MCCREERY PERFORMS ON “SAM’S PLACE” AT THE RYMAN AUDITORIUM 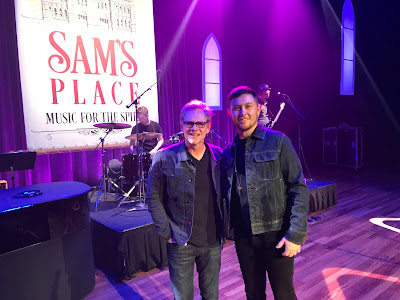 Steven Curtis Chapman and Scotty McCreery on the Ryman Auditorium stage, just after rehearsing their duet performance of “His Eyes” for “Sam’s Place: Music for the Spirit.”
(Photo Credit: Scott Stem) 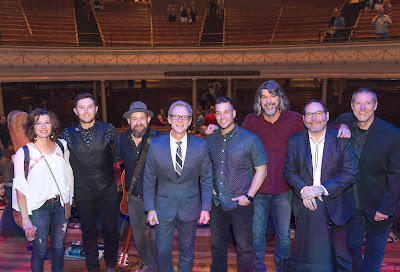 Scotty McCreery performed as part of “Sam’s Place: Music for the Spirit” at the Ryman Auditorium last night (9/17). This was the final night in the 2017 season of the series of shows which is hosted by legendary Christian music entertainer Steven Curtis Chapman. McCreery performed three songs, including his current Top 40 smash “Five More Minutes” as well as his Platinum-certified Top 10 hit “See You Tonight” and his concert staple “Something More.” The ACM, BMI and CMT-Award winning singer/songwriter received a standing ovation from the audience after his performance. As a life-long fan of Chapman, McCreery was thrilled when the show’s host joined him on stage to perform a duet version of Chapman’s song “His Eyes.”

McCreery is currently in the studio recording his next album, which will be released on Triple Tigers Records / Sony Music Entertainment.
Posted by LovinLyrics at 12:23 PM