MIKE AND THE MOONPIES SET TO RELEASE ‘STEAK NIGHT AT THE PRAIRIE ROSE, FEBRUARY 2 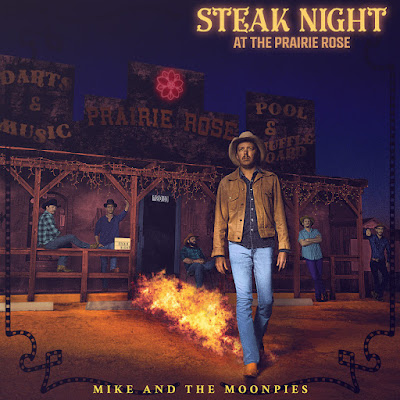 Old-soul honky-tonkers, Mike and the Moonpies, are set to release ‘Steak Night At The Prairie Rose’ on February 2. Coming off the critical success of 2015’s ‘Mockingbird’ and the following year’s jam-packed double-disc ‘Live at WinStar World Casino and Resort,’ their forthcoming and fifth studio album is not only most ambitious effort to date, but it cohesively showcases the Austin-based band’s display of irresistible, good-time spark and spirit of traditional country, classic rock sensibilities and sublime songwriting

Recorded at Yellow Dog Studios in Wimberley, Texas, ‘Steak Night at the Prairie Rose’ was produced by Adam Odor and features the stellar musicianship and artistry of frontman/guitarist Mike Harmeier, guitarist Catlin Rutherford, drummer Kyle Ponder, bassist Preston Rhone, steel guitarist Zachary Moulton, and piano, organ and Wurlitzer player John Carbone. It was Odor who recorded, mixed, and mastered their live album, which in turn landed him the gig helming Steak Night. This marks the first time since the Moonpies inception that Harmeier ever felt comfortable handing the reins completely over to someone else. “Adam ended up just killing it on the live record, and I think we immediately knew that we were going to make another one together,” says Harmeier, who had long been an admirer of Odor’s resume both on his own (Cody Canada & The Departed, Jason Boland & The Stragglers) and as an engineer on countless projects by famed producer Lloyd Maines (Joe Ely, Dixie Chicks).

Harmeier notes that the only “concept” he had this time around was to keep the writing “simple” enough to allow the rest of the band room to really go to town. “The only thing I really wanted was for the band to just have fun playing the songs, because I wanted the album to showcase the players on top of the songs that I wrote — just like the live record did.”

“From its inception, ‘Steak Night’ was and is a band album,” notes Odor. “No extra layers, no added studio musicians (except for the genius Mickey Raphael guesting on “The Worst Thing”), no unwarranted overthinking about what is expected. We worked out musical parts and arrangements together, we worked on instrument tones together, and we hit record on the tape machine and played it together. Some of these songs came together in a matter of 2 to 3 takes, others took many, many, different directions before landing on what you hear today. And most importantly, what you’re hearing on this album is what you’ll be seeing at each show, night after night.”

For this release, Harmeier wrote or co-wrote all but one of the album’s ten songs (the exception being “The Last Time” by friend Jonathan Terrell). Highlights include album opener “Road Crew,” which kicks things off at Highway Patrol-baiting speed powered by the twin-engine roar of electric twang and runaway pedal steel, and the sweepingly melodic gambler’s lament,

“I love that country music era coming out of the outlaw thing and going into the more ‘contemporary country stuff,’ where the production starting getting a little bit more poppy but was still kind of dirty,” Harmeier explains. “For me, that’s when things started to get really interesting musically, and I think this whole record kind of has that ’80s thing to it — probably because there’s so much Wurlitzer all over it.” There’s also a whopping dose of twin electric/steel leads, a little Talk Box a hint of Willie-worthy harmonica (courtesy of guest Mickey Raphael on the waltz “Worst Thing”), and a whole lot of humor, ranging from the nudge-nudge-wink-winkery of “Might Be Wrong” to the barbed-wire irony of “Wedding Band.”

The album’s earnest title track plays like an early chapter from Harmeier’s autobiography, this one going all the way back to his very first time playing music onstage in front of an audience at age 13.

Mike and the Moonpies will be burning up stages throughout 2018 kicking off the year with multiple shows at The MusicFest at Steamboat in Steamboat Springs, CO in January. Stay tuned for tour announcements.

In other news, Mike and the Moonpies were just featured on acclaimed singer-songwriter/producer Bruce Robison’s new web series The Next Waltz. The band sat down to chat with Robison and perform poignant renditions of Rusty Wier’s “Outlaw Love” and “Don’t It Make You Wanna Dance (posting on November 23).” Watch and follow here.

Steak Night at the Prairie Rose

Getting High at Home