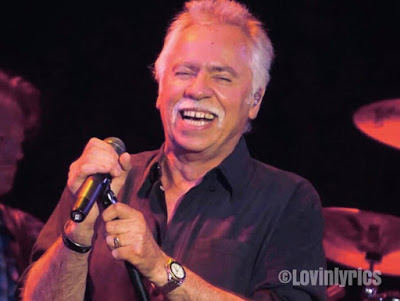 It's been a minute (or two or three or four hundred) since I was able to catch up with one of my favorite people on the entire planet and one of country music's biggest personalities, Joe Bonsall of the Oak Ridge Boys. With the start of a new year, I thought I'd shoot him an email and see if I could get some scoop on what's been going on and what's coming up and being the kind of great guy he is, he took the time to put me back in the loop :-)

- How would you define the secret of achieving longevity in an industry where the career span doesn't seem to last quite as long as it used to?

Well, I am not sure how others do it, but I’ll tell you there is still a lot of longevity out there. What we have done for years is work hard, be honest, make good decisions, pick great songs to sing, and give it all we have every night. It’s a formula that works for people like us, Charlie Daniels, and The Bellamy Brothers, as well as Little Big Town, Tim McGraw, Blake Shelton, and I could name many more. I will say that there IS an amazing spirit at work in our group, and we are all in tune with it. It keeps us going!!!

Duane is a smart guy and has a keen sense of business. He always seems to think things through a bit farther than the rest of us and, besides that, he one of the best singers EVER. Golden is a dreamer… always looking ahead… We have followed his visions many times. He also possesses an earthy and honest approach to singing that people love. Richard is as solid a guy as his voice. He provides a foundation of reason on a daily basis. He is also our voice on countless interviews and, like all the guys, he is honest and true.

It’s amazing to be a part of a group of men that you can trust with your life! What I would hope they might say about me is that I give this group all I have on a constant basis! Every note of every song, energy and, hopefully, a plate of ideas and common sense… Hopefully!

- The Oak Ridge Boys has one of country music's longest and most dedicated fan bases. What makes the Oak Ridge Boys fan base so unique?  What personal experiences with a fan stand out in your mind through the years? Is there something a fan had one or said that really made you emotional and has stayed with you?

Well, that would be too many to mention. I will say that our effect on children has been amazing. Hey, like I always say, we have been passed down through the years. Grandpa loved the Oaks. My parents loved the Oaks. WE love the Oaks, and our kids love the Oaks. The primary reason for our longevity? We belong to America!!!

- How in the world does Mary deal with you being home? LOL!

She LOVES me… pure and simple… We are very blessed to have each other. I could never do any of this without her!

- Tell me about the Joseph S. and Mary Ann Bonsall Foundation. What it does? How it gives back? Is there a way fans can get involved and help?

We started our foundation after the success of the Molly The Cat Book Series in the late 90’s. We wanted to do something for children’s literacy and for animal causes, and we have done that for decades. We fund it mostly ourselves, but people can send a tax-exempt donation to The Joseph S. and Mary Ann Bonsall Foundation, 16845 Kercheval, Suite 5, Grosse Pointe, MI 48230

There are no administration fees and no salaries paid… 100% goes to no kill animal shelters that we support around the world, child literacy causes, and pet education.

- Fans know how important your cats are to you and that you have quite a few of them. Saturdays are your designated #Caturday on Twitter and we all love that. One of our first conversations on Twitter was about "Ted." I was joking about how our neighbor named his cat "Scott" and was outside one night screaming for him and you told me you had a sweet kitty named "Ted." How many cats do you have?

We loved our TED. He was a great cat. He passed away just last year. We once had nine cats, which really was quite a load. We are now down to five. Two girls… our BayBe’ and our Queen Sally Ann, who is almost 20. And three boys… our Sunny, who has diabetes, Crockett, and Mitty. We love our kitties!

-  Tell me a little about the new album the ORB just recorded with Dave Cobb. When I was in the ORB office back in September and talked to Duane for a bit, he told me it's different than any other Oaks album and it is going to be one of the best albums you've ever released.

The new album, which releases in March, came out so very well. Young Dave Cobb had a vision for this project, and we all bought into his leadership. The result is amazing. I think people will moved by it!! I know I AM!

(Note from Jenn - Dave Cobb is THE BOMB when it comes to production. Dave has produced some of music's best albums including Sturgill Simpson's "Metamodern Sounds in Country Music", Jason Isbell's "Southeastern", and the "Southern Family" album which is collaboration including Chris Stapleton, Jamey Johnson, Shooter Jennings and others. He also produced one of my personal favorite albums which happens to be the Oak Ridge Boy's "The Boys Are Back" which was their first project with Dave. You KNOW this new album is gonna be amazing.)

Another big tour we are calling The "Shine The Light Tour", as well as a ton of press for the new album, the new album itself, and after a bunch of fairs, festivals, and theaters, another monster Christmas tour, which will take us West this year. (Insert pouty face here from Jenn - that means no NC shows for me this year.)

- How's your hand after your surgery? Are you able to play some banjo yet? Have you improved? HA!

I have not improved, but I am playing again. My case of a rare ailment called Dupytrens Contracture had deformed several fingers on my right hand, which hobbled my playing. Other than that, I hid it very well. (He did! I saw him several times and NEVER noticed a thing!) In August, a top hand surgeon operated on my hand for over three hours, digging all that growth away from my tendons. Now my fingers are straight again!!!

-  Duane once said that the Oaks have planned a lot of things in their career but planning for retirement isn't one of them. Does that still stand true? This answer better be yes.

-     Truer than ever, YES!!! We are already plotting 2019 and beyond. There is no quit in The Oak Ridge Boys. Only God will tell us when to stop. Joe’s not coming to the bus tonight… He is dead. That’s the only thing that will stop me!

The Oak Ridges Boys are all over social media and yes, they do it themselves. I've watched them many a time before a show talking with fans on Twitter, Facebook and Instagram. Joe and Duane are two of the most personally interactive personalities on Twitter, always taking time to respond and bring a smile to the face of anyone who reaches out. Aside from the great music, it's this kind of personal connection and appreciation that keeps them at the top of the game and fan favorites. You can find them on the sites below: 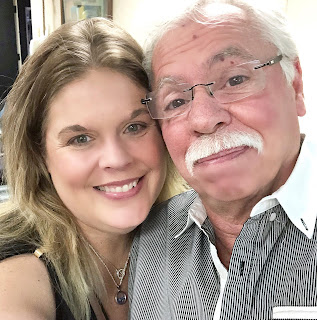 Jenn with Joe in Myrtle Beach, SC at the Alabama Theatre - September 2017
Follow Jenn on Twitter at @lovinlyrics