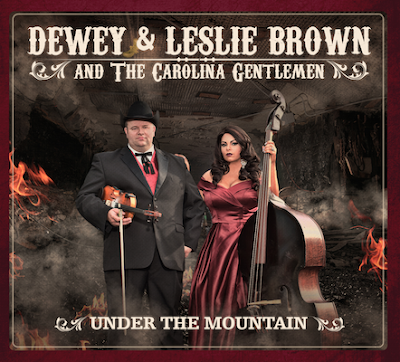 The wait is over, as Bluegrass band Dewey & Leslie Brown release their debut album, Under the Mountain. Joined by their world-class band, The Carolina Gentlemen, the sound is heavily influenced by Dewey’s 11-year tenure playing with the late Dr. Ralph Stanley & The Clinch Mountain Boys. The highly anticipated project includes 14 all-new recordings and is now available on iTunes, or by visiting deweyandlesliebrown.com.

"I'm very excited about bringing our new songs and music to bluegrass music lovers everywhere," said Dewey Brown. Leslie adds, "I am also very excited to see where this journey takes us, God definitely put this in our hearts and we are blessed to be able to share this album with you all, hope you enjoy it!"

The project is fueled by the lead single, “Those Old Mountains,” which showcases the band’s impeccable harmonies. The song was met with high critical acclaim, gaining attention in Bluegrass and Americana circles. The autobiographical song tells the story of powerhouse lead vocalist Leslie Brown’s upbringing in the Appalachian Mountains. Fans can stream the lead single on Spotify.

With songs hitting the highest of highs and the lowest of lows, much of the project was inspired by Leslie’s time growing up in the hills of Virginia, as an authentic coal miner’s daughter. Penning 12 of the 14 songs on Under the Mountain, much of the project was inspired by the singer/songwriter’s upbringing, combined with masterful fiddle and vocals from Dewey. One standout track “Little Canary,” tells the story about how miners would send in yellow canaries to test for methane gas. The thought-provoking track serves as the inspiration for the project title, with other songs containing similar themes. The Hazel Dickens written “Black Lung,” is another highlight on Under the Mountain, detailing a common disease associated with coal mining.

They are celebrating the release by performing a show this Saturday, March 17, in Liberty, N.C. at The Liberty Showcase Theater. During the event, fans can expect to hear all-new music played live for the first time, along with other bluegrass standards. "It is a pleasure to debut our album at The Liberty Showcase in Liberty, North Carolina" says Leslie. Tickets start a just $10, and are available at thelibertyshowcase.com.

Under the Mountain Track Listing: