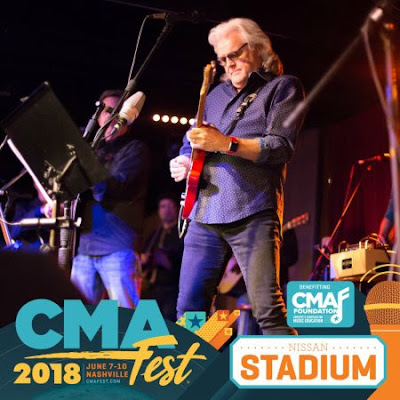 Fifteen-time GRAMMY® Award-winning music legend Ricky Skaggs is bringing his Country hits front-and-center at the 2018 CMA Music Fest in Nashville. Skaggs and his band, Kentucky Thunder, will appear on the Nightly Concerts at Nissan Stadium stage on Sunday, June 10, where he'll perform many of the hit songs that made him famous.

"When I found out that I'm gonna be performing at CMA Music Fest this year, I was SO happy," notes Skaggs. "I thought, WOW! Getting to play some fiery Bluegrass music in that huge stadium, in front of thousands of young Country music fans, this oughta be killer! But then as I read on I realized the CMA wants me to play my old Country hits from the 80's and 90's with a full Country band with drums, piano, pedal steel guitar, twin fiddles, and my red electric guitar with my amp cranked up! Sounds to me like they want some old school Country music. I'm really excited about that, but surely I can find a way to play some of that fiery Bluegrass too!"

Concertgoers can expect to hear Skaggs tear through many of his chart-topping songs including "Highway 40 Blues," "Honey (Open That Door)," "Heartbroke," "Country Boy," and "Uncle Pen," among others.
Posted by LovinLyrics at 4:49 PM