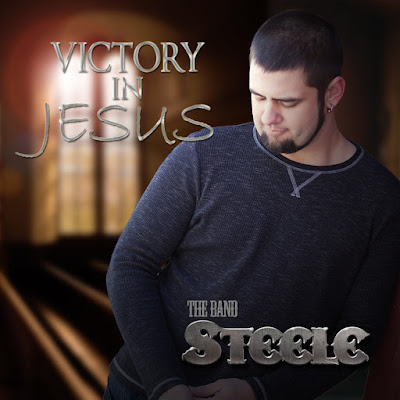 Responding to overwhelming requests and popular demand, Fire River Records’ country recording act The Band Steele (Bo Steele/Ben Rubino) will release its studio recorded a cappella rendition of
E. M. Bartlett’s “Victory In Jesus”* to coincide with the upcoming Christian Holiday at the end of the month. The spiritually-moving single is available via the pre-sale promotion (going on now), with the official release, of both the track and corresponding music video scheduled for Good Friday, March 30, 2018 via digital retail and streaming outlets. The release of the track runs in tandem with the pair’s latest single, titled “195,” which is currently enjoying traction on the MusicRow and Indicator country radio charts.

The motivation to record the beloved American Christian song (sung by millions in worship services and recorded by some of gospel's biggest names) stems from Bo Steele’s impromptu a cappella performance of the tune in a hospital waiting room; Steele’s performance was captured on video, went viral on YouTube, and has since become one of The Band Steele’s most-requested songs.

“My grandmother was in the hospital and as I sat there, I felt so numb. One of the nurses asked me to ‘sing something’ and ‘Victory In Jesus’ came to my heart; it’s what came out,” Bo Steele introduced.

“We never expected this kind of reaction from a performance so raw and so personal,” Ben Rubino added. “I have to just sit back and watch Bo on this one…there is nothing I could lend to his emotion and vocal delivery that could make it more moving than when he sings it a cappella. I feel like this is how God originally intended this recording from The Band Steele.”

Following the unplanned hospital performance, Bo Steele quickly became an Internet phenom capturing new fans by the millions and the attention of the New York City-based Fire River Records. The label signed The Band Steele to a multi-album record deal nearly on the spot.

The Band Steele will release the corresponding music video (produced by Tytan Pictures, Eatonton, GA) simultaneously with the single digital release (March 30, 2018). Filmed in Eatonton, the clip features local scenery and area residents; the concept portrays a husband and father in mourning, his struggle to overcome loss, and to find an understanding and resolve. He comes to find strength in Jesus.

“We get requests for this gospel tune at songwriter’s rounds, in nightclubs and some of Nashville’s renowned hang-outs. It means something to people and that means something to us. I hope we’ve done this incredible song justice. ‘Victory In Jesus!’,” Bo said.

“Victory In Jesus” will be available via major digital retail and streaming outlets (iTunes/Apple Music/Google Play/Spotify/Pandora) for pre-order on 3/20/18 and for download on 3/30/18. The duo’s current single, “195” from The Band Steele’s latest CD (MOON IN A MASON JAR) is also available here: smarturl.it/TheBandSteele