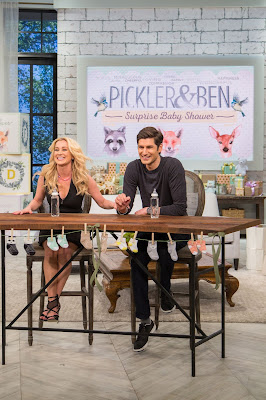 "We are so honored to be amongst such incredible talent in this category. There's no way we are beating Steve Harvey," said Ben Aaron.

Disney/ABC Home Entertainment and Television Distribution is distributing the show in national syndication and has so far cleared 125 markets for the second season, adding more every day.

"I am so happy for all our nominees and couldn't be more thrilled for Kellie, Ben, Joe, Wes and Debbie," said Executive Producer and Happy Street Entertainment Co-Founder Lisa Erspamer. "To get a show off the ground is no easy feat, but getting these nominations in our freshman year is a testament to everyone involved with the show, both in front of and behind the cameras."

To stay up to date on episodes and get a behind-the-scenes look at Kellie and Ben in action, follow "Pickler & Ben" on Facebook, Twitter and Instagram. Find out when and where the show airs and request tickets to a taping at picklerandben.com.
Posted by LovinLyrics at 2:59 PM