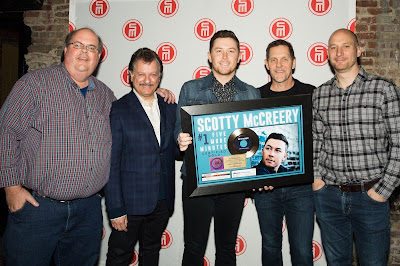 Backstage at his show at The Gramercy Theatre in New York City on Monday night celebrating the release of his new album Seasons Change, Triple Tigers recording artist Scotty McCreery received a plaque commemorating the RIAA Gold certification status of his recent No. 1 hit, “Five More Minutes.” The song, written by McCreery, Frank Rogers and Monty Criswell, topped both the Billboard and Mediabase / Country Aircheck Country Airplay charts, and was McCreery’s first ever No. 1 song.

Posted by LovinLyrics at 3:06 PM