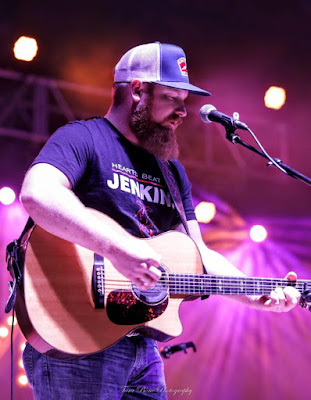 
"Upon meeting Jake Flint you know you have met a man with something to say. His story and song, which are one in the same, are presented with a sense of realism that comes as no surprise. He stands confident on the stage and delivers one song after another smoothly with a real voice that comes from a real place. On a stage of what was a "new faces" show, Jake was not as new as the title of the show lended you to think, because his craft is far beyond that point with his skill in writing, singing, and playing proving he is seasoned. His personality and delivery is top notch and very accessible to those in front of him. He turned me from an interested listener to a fan. Jake Flint is a great find."

The Oklahoma performer took the opportunity of the coveted performance slot to sing two of his original songs, "Whole New Kind Of Blue" and his current single, "Cowtown." He also delivered a powerful interpretation of the Leonard Cohen classic, "Hallelujah." In addition, Flint played lead guitar for the other artists on the bill including Clay Hollis, Tanner Sparks, Jade Marie Patek, Bubba T, Robert Ray, Donice Morace and Kenna Danielle.

"I feel really blessed to have been included in the TRRMA 'Future Faces Show' alongside some phenomenal new artists who became new friends," states Flint. "Many thanks to Jade Marie Patek for inviting me to perform with her at the main awards ceremony and especially to Dave Smith for putting on a top of the line event as always. Can't wait to work hard this year and attend again next year!"

Flint has made strong inroads into the Texas/Red Dirt music scene this year since the release of his debut single that has brought attention to him with significant radio airplay and chart action. That coupled with recent inclusions in The Red Dirt Radio Hour, hosted by Red Dirt pioneers, John Cooper and Brad Piccolo of the Red Dirt Rangers, and his upcoming appearance on the Ranch Roadhouse radio show live from the Rockett Café in Rockett, TX, promise to further cement Flint as a contender destined for greater success.

For more information about Jake Flint, connect with him online: