AMERICAN AQUARIUM RETURN ON JUNE 1 WITH NEW ALBUM AND LINEUP 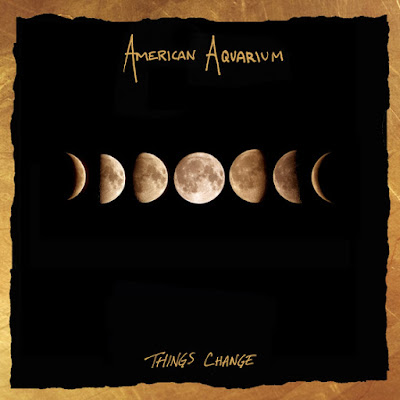 Things Change, the new album from American Aquarium will be released on June 1st via New West Records. A narrative chronicling the last two years as seen through the eyes of front man BJ Barham, Things Change is an introspective reflection on personal growth, adjustments and the current social climate in our country.

Since the release of his highly acclaimed solo album Rockingham (2016), there have been numerous changes in BJ Barham's life. The previous configuration of American Aquarium, the band he helped found nearly a decade ago, dissolved in April of 2017, leaving Barham to decide whether this was the end or a new chapter of American Aquarium. Choosing the latter, Barham successfully put together an entirely new lineup by fall of last year. During last summer, Barham (with his wife and dog) embarked on the ambitious "Great 48 Tour", where he played all 48 lower states in 59 days. CMT documented the tour with an exclusive video diary, which can be viewed by clicking HERE. Barham, who has operated with a DIY ethos for most of his career, was recently approached by independent label New West Records to form a partnership. Along with forming a new band, Barham has skillfully revamped the support team around him.

The songs on Things Change are clearly influenced by Barham's earlier experiences. "When We Were Younger Men" reminisces on the simpler days of American Aquarium, a tribute to brotherhood, hard work, and the toll that running the roads can eventually take on a group of musicians. Songs like "Things Change" and "One Day At A Time" delve into personal evolution and the vulnerability of coming to terms with the past. An album highlight, "The World Is On Fire", is a reaction to the political climate in our country. "When did the land of the free become the home of the afraid, afraid of the world, afraid of the truth, afraid of each other, this ain't the country my grandfather fought for, but I still see the hate he fought against." Powerful lyrics, elevated with the chorus of "we can't give in, we can't give up, we must go boldly into the darkness and be the light." It's obvious that BJ Barham is in a healthier space, grounded, focused, and excited for continued transformation.

Things Change  features the new members of American Aquarium who are Shane Boeker on lead guitar, Joey Bybee, drums, Ben Hussey, bass, Adam Kurtz on pedal steel and electric guitar and BJ Barham on vocals and guitar. The album was produced by John Fullbright and engineered by Wes Sharon (Turnpike Troubadours, Parker Millsap) in Tulsa, OK and mixed by Ryan Hewitt. In addition to production, Fullbright added his touch on piano, clarinet, mellotron, guitar and vocals.

American Aquarium will be embarking on an expansive national tour in support of Things Change.

Upcoming 2018 tour dates listed below, with more to come.

Go to www.americanaquarium.com for more information